In English, Bluebirds have been taking part in a debate about whether it was right for Miss Dainter to just have a little taste of the chocolate cake that Mrs Parry had brought into school to share with the teachers. Without her knowledge, Miss Dainter did have one small slice of the cake and found it yummy.
The children took part in conscience alley; this is where they each say their side  for or against Miss Dainter eating the chocolate cake.
For not eating the cake:
Yusuf: She did not have permission to eat the cake.
Anren: It’s not right because Miss Dainter ate it right in front of the class (not a good role-model.)
Charlie: It’s not breaktime and Mrs Parry said it was for then.
Musa: She couldn’t stop herself from eating the cake ( no self-control.)
Declan / Aya : She may have been hungry but it was not breaktime yet.
For eating the cake:
Tatenda: She felt left out as it was only for the teachers.
Alexander H: It was teasing and too tempting for her as she smelt it.
Elias: It’s not fair that the cake is only for teachers.
Sam: Teaching Assistants work harder than teachers so she should have the cake as well as the teacher.
Shriya : A teacher just does the marking whereas Teaching Assistants help everyone.
We then enjoyed Micheal Rosen’s Poem called Chocolate Cake. You can listen to him reading it here: https://www.youtube.com/watch?v=tWrOeNKvtHI
Bluebirds have been learning about the meaning of empathy and how it affects others and themselves.
Mrs Parry read the story My Beautiful Voice by Joseph Coelho and Allison Colpoys. The story tells of a boy that has not found the confidence to use his voice in front of other people. The book follows his journey from shy child to realising he has a beautiful a beautiful voice.
Olivia: The new teacher knew how he felt and that he had his voice in him. This means the teacher had empathy.
Ayra: I learned that he wouldn’t talk because he was to shy and the new teacher had a book about quiet Heros and unheard songs. This made him have an idea in his head. She had empathy and knew how he felt and felt the same.
James: In My Beautiful Voice the teacher felt what the child felt, she helped him face his fears. Empathy is when you feel what other people are feeling. When a child hurt his leg yesterday, I knew how he felt as that had happened to me when I fell off my bike. I hurt my leg. It’s like when you’re sad, scared, worried or also when you’re happy.  Others can feel and understand how you feel.  That’s empathy.
Excellent understanding Bluebirds! 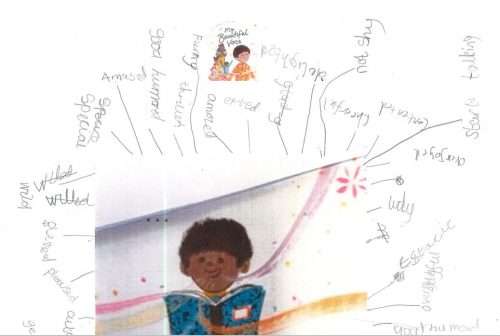 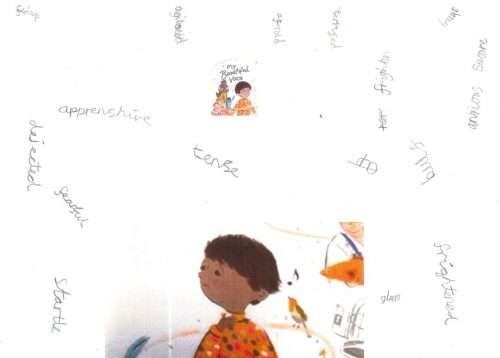 Today, Bluebirds acted out the story of the Lion, Mouse, Fox and Human. After the drama they talked about different type of characteristic and how each one behaved. They learned there was basically three ways of approaching a difficult situation, argument or conflict. Some people would be aggressive, others passive and some assertive.  The children learned what each word meant.
Aggressive: sounding angry, trying to win or get your own way by force or because you are bigger or stronger, without thinking of the other person.
Passive: giving in or running away from the situation so that the person left gets their way or wins, because they don’t want to say anything.
Assertive: trying to come up with a solution or result that everyone feels OK about.
Bluebirds split up into small groups and acted out each one of the ​characteristics. They looked at which kind of person was best to solve any problems they may have or face in the​ playground. They then decided that the best characteristic was assertive, as they could think of other ways to reach a solution.

Mrs Parry showed the class a photo of a Mum telling off a little boy.  This little boy had been told not to play on the ice but he did and then fell over.  When he came home, he did not want his Mum to see he had hurt himself.  Bluebirds discussed why would the little boy want to try and hide his feelings?

Next the class split into groups to act out four possible situations where someone might decide to hide or show their feelings.  Each group acted one out and the rest of the class guessed why they made their choice and considered what they were really feeling:

Mrs Parry asked children to conduct a “Good To Be Me Interview” in Talk Partners about what things they had done over the last few weeks that they were proud of.
Declan – Mastered a wheelie on his bike.
Aizah – Did great peer mediating in the playground.
Elias – Won third place in a tag team competition.
Reva – Got a gold card today.
Jacob – Built a lego ship.
Bethany – Got a certificate and trophy for dancing.
Isla – Got a gymnastic badge.
Yusif – Won a cup at football.
Shriya – Got enrolled as a Brownie this week.
Anren – Read a chunky book.
Ryan – Completed a workbook at home and got all the answers correct.
Mrs Parry showed the class two photos of someone looking disappointed and hopeful.  The children thought of other words to describe how the people felt (ashamed,  a failure, jealous, miserable, frustrated, happy and excited).
Next the children heard a story about a boy called Joe.  It was his birthday and he was hoping his Dad would visit as he hadn’t seen him for 2 years.  His Dad didn’t visit so Joe was disappointed.  The class discussed all his different emotions. Alex Rogers suggested Joe hadn’t spoke to his Mum about his hopes and disappointment as her Mum and Dad might not get on any more or that Mum misses Dad too and he didn’t wish to upset her.   Yusuf said maybe his Mum needs him as he cheers his Mum up. Elias wondered a the mum hadn’t got much money and have saved up to buy him his football kit, he didn’t want to look ungrateful or feel like she’d wasted her money as he was still feeling disappointed on his birthday.

Bluebirds looked at ways to stay heathy and what it takes to keep them that way. All children came up with what they did to stay heathy. Here are some ideas that you could use at home.

To keep your body heathy

To keep our minds heathy,

Bluebirds watched an online assembly this week and created some beautiful “Support Balloons.” 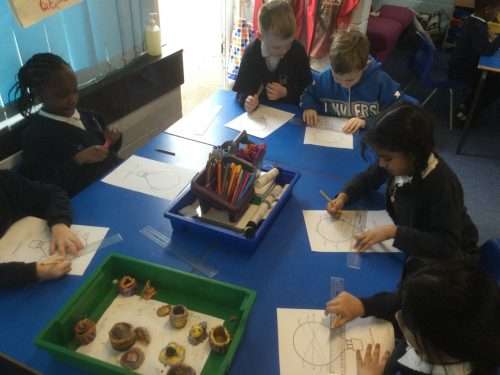 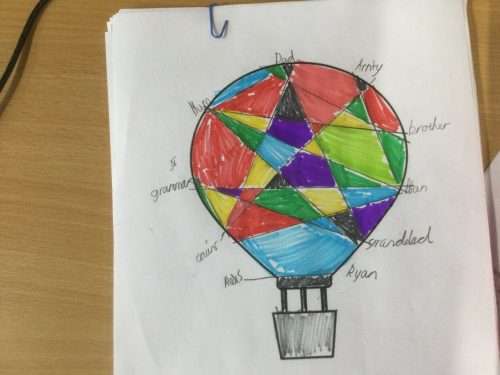 Bluebirds this afternoon looked at copyright and ownership as part of Safer Internet Day. Mrs Parry told the children the following statement: Just because I have a copy of an image or song that does not mean it is mine. The children then talked about if they thought this was true or not.

They looked at Yusuf and Ayra’s work and talked about if that work belonged to them or if it belonged to anyone who had a copy. As Ayra had worked so hard on her picture, it means that it belongs to her only and if you wanted a copy then you would need to ask.

The class watched a video about two characters that were disagreeing about who owned a picture, both felt they had created the picture on the computer. The children came up with ideas to help them solve this problem. First the children talked about having a name on the image. When no name could be found, the characters looked at other ways to prove who owned the work. They came up with looking at a folder on the computer to see whose folder it was in.

Like the character in the video, the children all save their work in a folder with their name on. 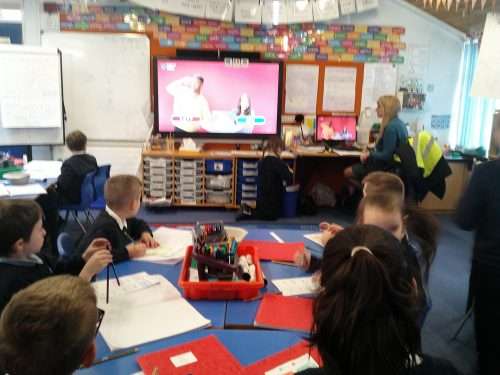 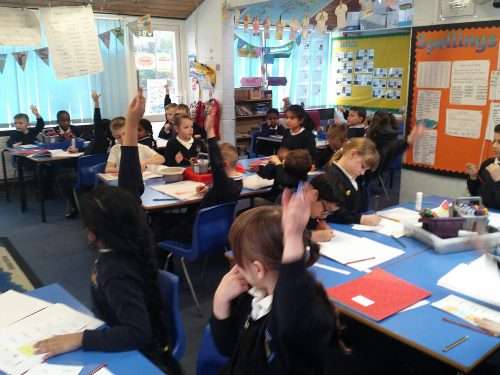 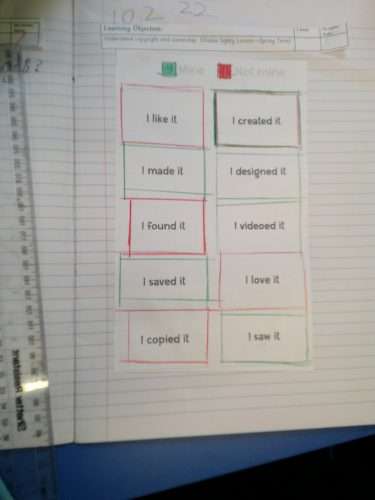 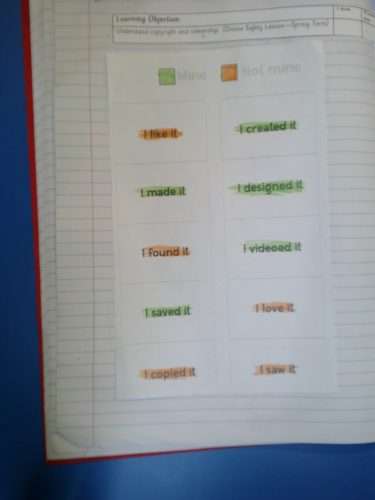 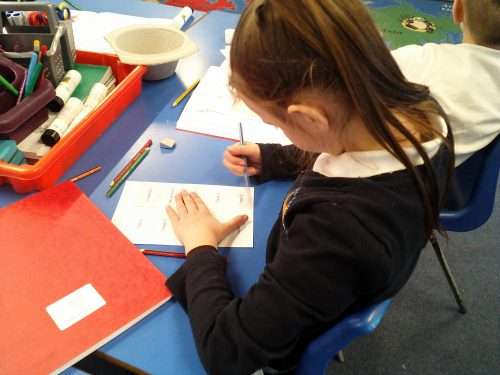 Bluebirds talked about their families today and shared who they lived with.  They discovered there were lots of different variations. Some people live with their grandparents whilst others live with one parent. Some children have siblings whilst others are an only child. Some children have step parents and step siblings. Sometimes families can have two dads or two mums and sometimes children can be fostered or adopted.
The class watched a short film of This Is Our House by Michael Rosen and Mrs Parry read two books called The Family Book and The Great Big Book of Families. 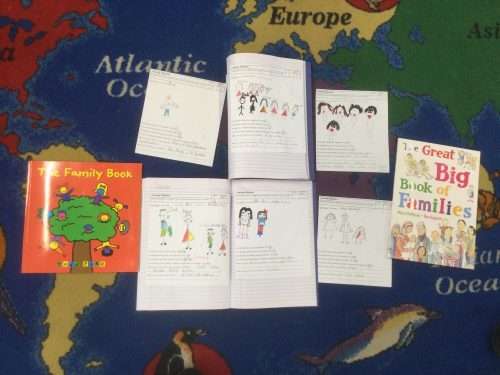 On Friday, Mrs Parry showed the class a selection of photos that were really important to her.  Mainly they included her family on special occasions and there was even one of her wedding day!
She pointed out that although they were just pictures to the children, when she looked at them, she could recall the whole event.  The children considered this and drew a picture of their happiest and most favourite memory. 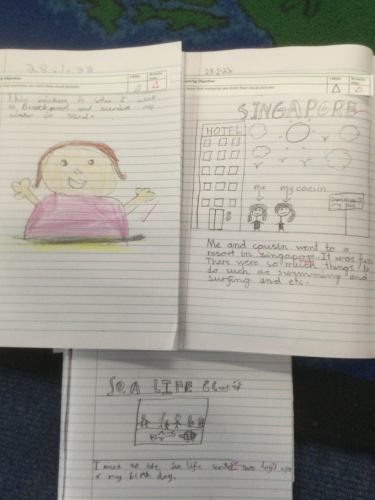