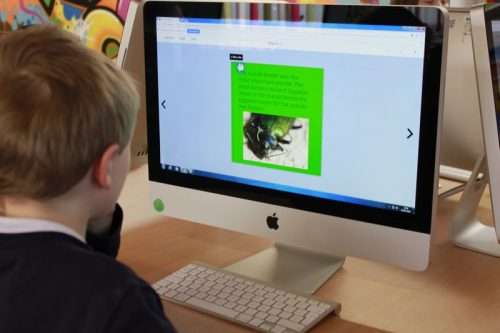 Year 3 Bluebirds have completed their eBooks based on Ancient Egypt. During the last few lessons, Bluebirds have researched, designed and created a book based on a specific topic.

The children have been exploring and creating their eBooks using a website called Book Creator. They typed their facts and also inserted related images. The children tried various font styles and backgrounds to add further design to the page.

Some children managed to also add some audio to their books by reading the facts from each page.

Here are a few examples of children’s completed books.

Sophie L
Click to read this book, made with Book Creator
https://read.bookcreator.com

Megan Niah
Click to read this book, made with Book Creator
https://read.bookcreator.com

By Huey Davies
Click to read this book, made with Book Creator
https://read.bookcreator.com

Katie and Kiall
Click to read this book, made with Book Creator
https://read.bookcreator.com

Bluebirds produced some great cross curricular writing today once they heard all about the mummification process… not for the faint hearted!

The children watched a short video about the process and in pairs ordered a set of jumbled instructions. Bluebirds created a toolkit check list of what needs to be included in a set of instructions such as numbered/bullet pointed clear steps in order, time openers, imperative verbs, and a list of what is needed. 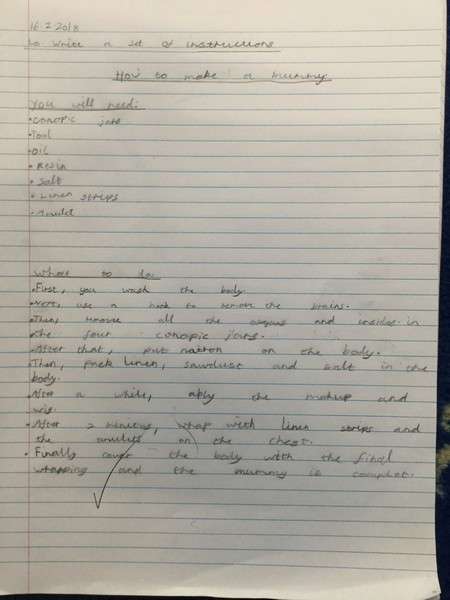 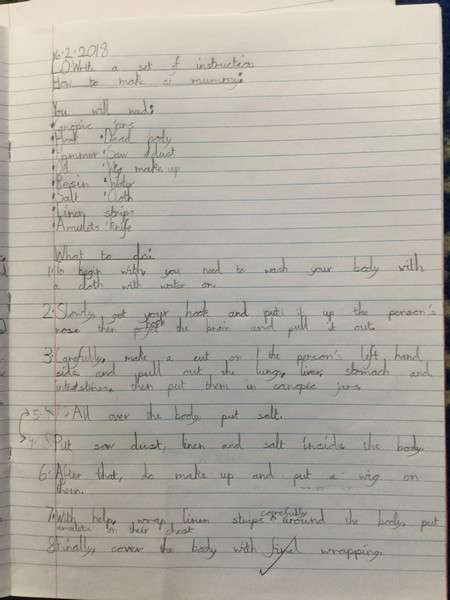 Today, Bluebirds were amazed to see the treasures that Howard Carter discovered in 1922.

They learnt how he found the sarcophagus in a second room with many treasures. The children continued to write their diary as Howard Carter and focused on descriptive sentences with adjectives, including feelings too. 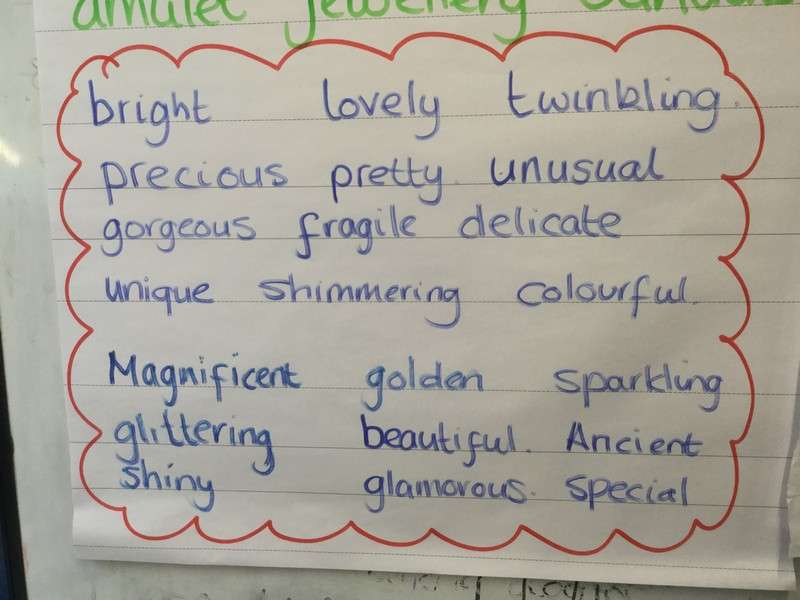 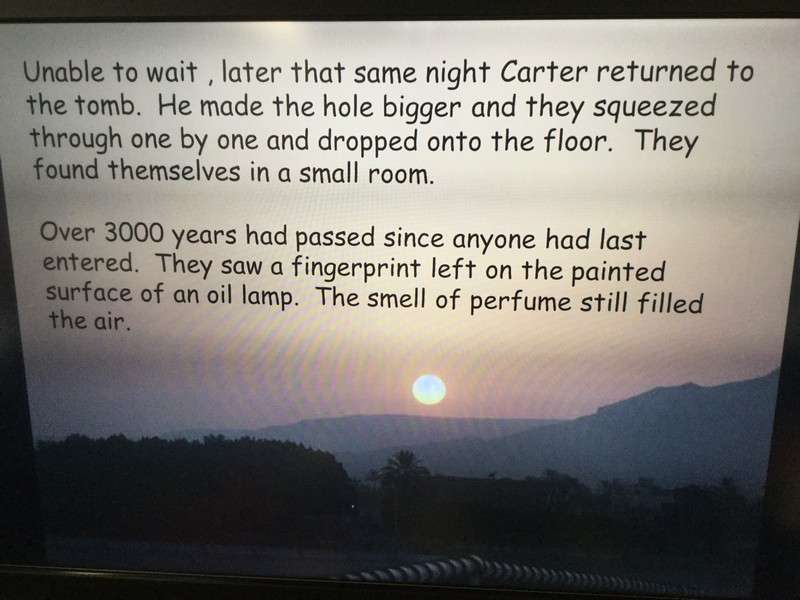 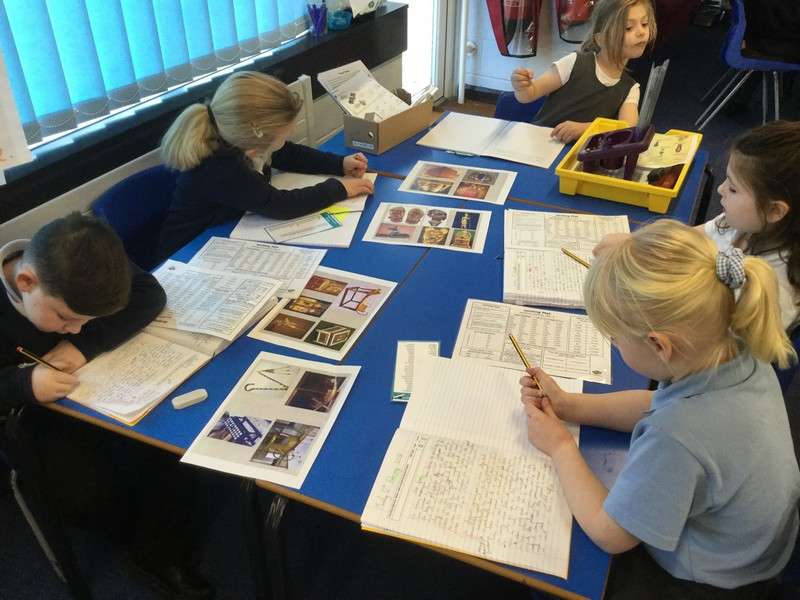 Today Year 3 heard the story of the challenge of Iblis.

The story tells how Allah asked all the angels and Jinns, which were spirits created from fire, to bow down (prostrate) to Adam.

Iblis, who was one of the Jinns refused to bow down.

Allah asked him why he did not bow down.

Iblis was furious, he did not understand why Allah wanted him (an important Jinn) to bow down to a human being made from mud. He was cross that Allah thought that Adam was better than him.

Allah was disappointed and told Iblis to leave paradise forever. Iblis said he would BUT he wanted to be allowed to stay alive until the day of Judgement.

Iblis left but vowed to spend his days misleading Adam and his offspring till the day of Judgement.

The class discussed the many ways that they can be mislead, doing things they should not do.

The class also discussed good learning behaviours, like perseverance. Perseverance helps us to learn and make things better when they have gone a little wrong. You can always try and learn from your mistakes. 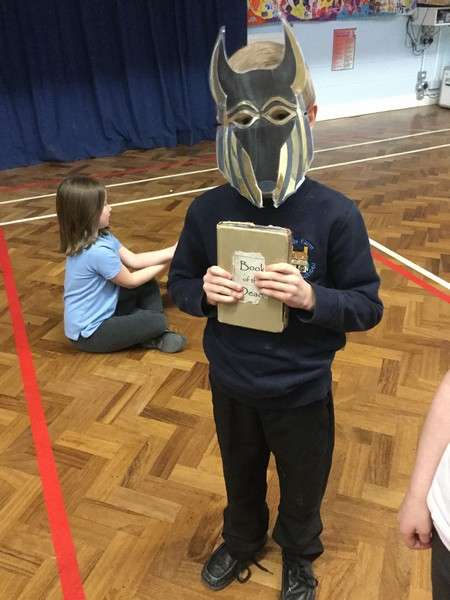 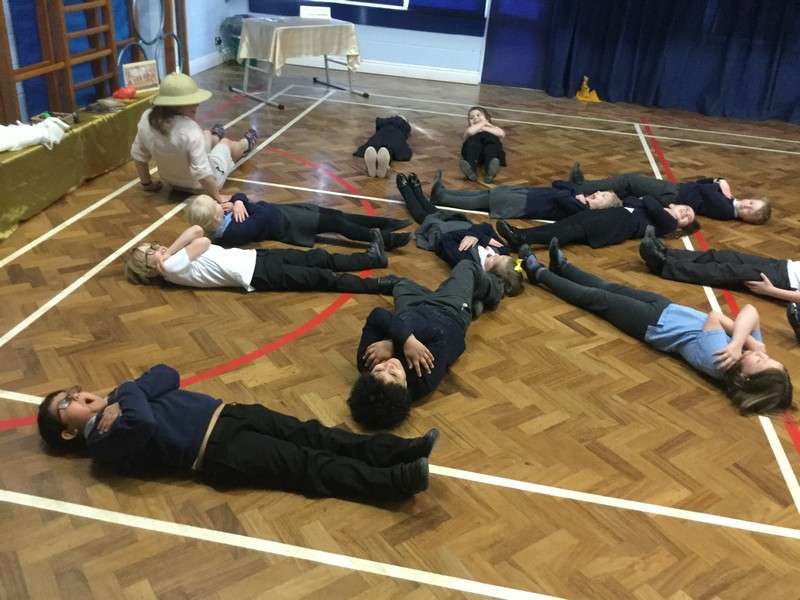 Bluebirds have enjoyed a fantastic afternoon of Egyptian drama. They learnt lots more Egyptian facts and acted out what happened to a person once they died. Queen Tutsoph (Sophie) was prepared for the afterlife. Lots of the children displayed excellent acting skills! Afterwards, the children searched for artefacts with torches to create an exhibition table. 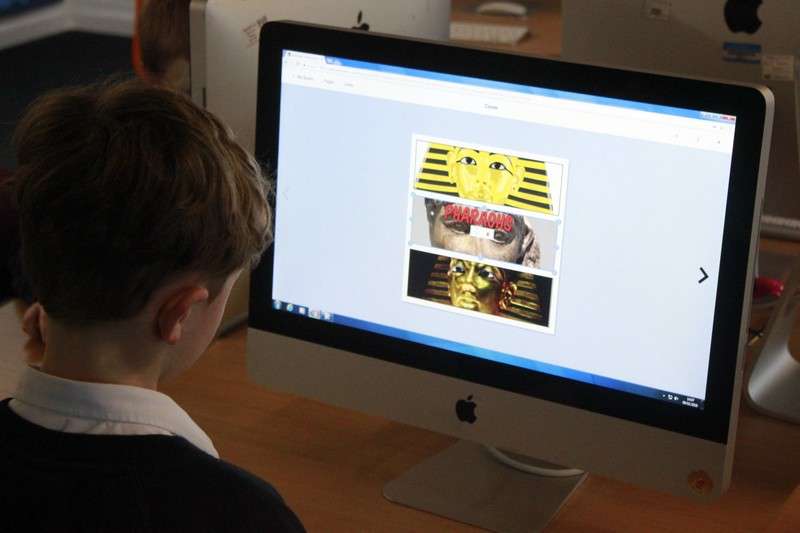 In Computing with Mr Baddhan, Bluebirds have started to create their eBooks in a program called Book Creator by designing their front covers and then working on the inside pages. Bluebirds will insert all the research they have found on their chosen topics into their books.

The children were asked to think of choosing the right pictures for each page and ensuring the pages look appealing to readers. Next week we will have the finished designs on our blog.

Bluebirds talked about friends they chat to or play games with online. 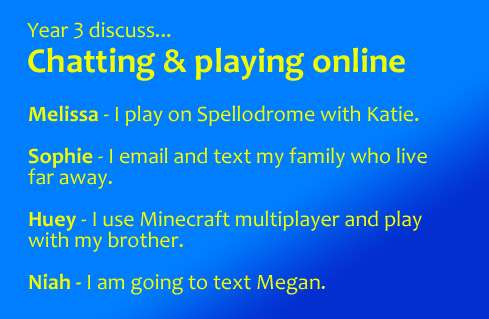 Next, they considered who are real/true friends and listed the qualities a good friend should have.
Children thought about what people can say or do on-line to feel good or happy such as sharing funny photos, liking and commenting on photos or posts and meeting up in games together.

After that, Bluebirds looked at a scenario where Jo had posted what she thought, was a funny photo of her friend. However her friend found it embarrassing and was even more upset to find out another person had shared it. The children considered how each party was affected and how it could be rectified. 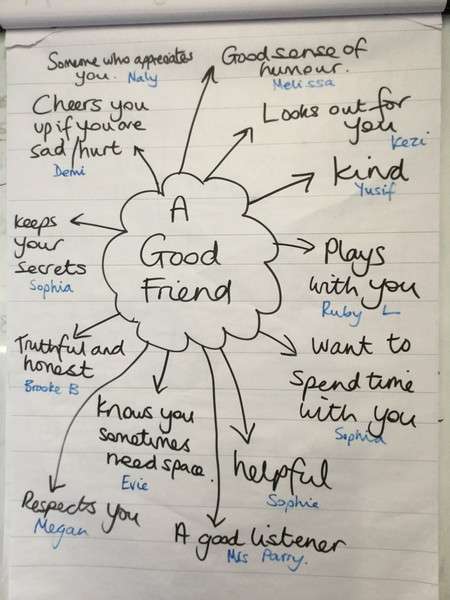 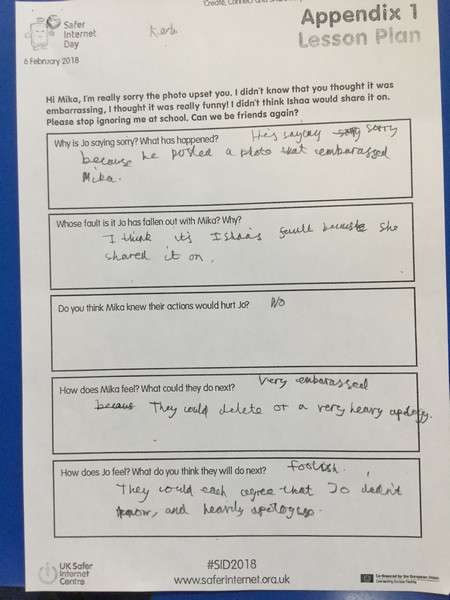 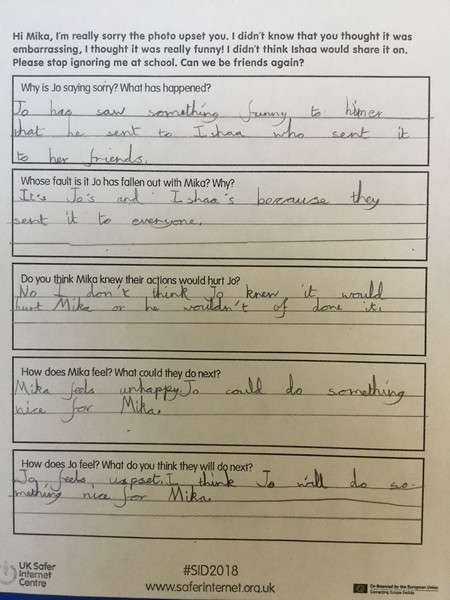 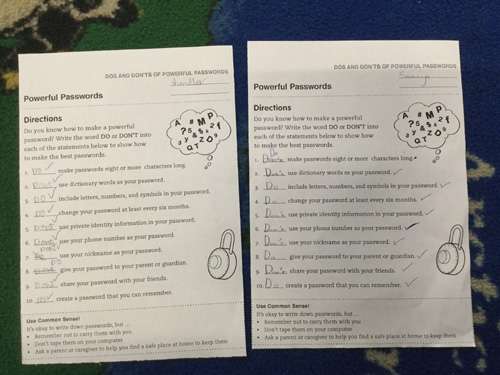 Bluebirds discussed how combination locks can only be opened by turning the dial in a secret combination of numbers that is hard to guess. This is to keep belongings safe and protected. They went on to talk about how passwords prevent other people seeing your private information on the internet. Bluebirds thought about how passwords would be useful in later life when they keep track of their bank account or shop online.

To put this into context, Bluebirds considered how they would feel if someone else used their password to steal points they had collected in a video game.

The children then played a “Do or Don’t” game. There were some surprises with the answers which was great as we all learnt more about keeping safe online! 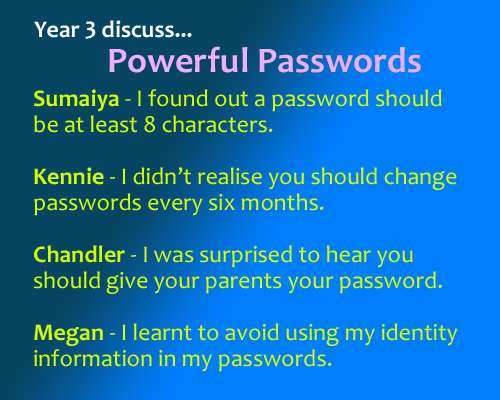 The children then set to work in making a secure password. They wrote down their favourite number, pet/favourite character’s name, a keyboard symbol and their favourite food. They rearranged these in various ways to create secure passwords that they were able to remember. Lexi and Joey thought about writing words in reverse too! 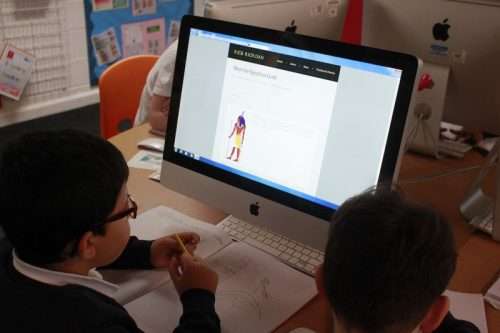 During Computing, Year 3 Bluebirds have started to research on Ancient Egypt for their eBooks.

Year 3 researched on their chosen topic:

The children also learned more about eBooks and that an eBook is a book on the internet, readable on iPads, laptops, computers mobile phones etc. 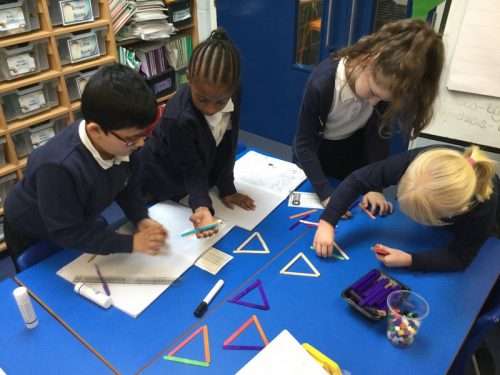