Over the term, Mrs Parry gave Bluebirds the chance to explore their own learning, whereby the children all chose an area of the Ancient Egyptians they wished to learn about. To begin with, children each made a mind map in pencil, about what they already knew about their chosen topic. They all created a research question and conducted independent research using information books and the internet. Research areas chosen included Gods, Homes, Foods, Mummification, Food and Drink, Pharaohs, Animals and Daily Life. The children added all their new facts to their original mind maps in purple pen, so they could see how much new information they had discovered.

Every child had the opportunity to make an e-book about their topic, with seven children carrying on with this over the February half term, because they enjoyed it so much! To find out more, nine children also visited the museum in Birmingham to learn more about Egyptians and see a real mummy for themselves! Bluebirds then considered how to share their research with the rest of the class. These ideas included, posters, information booklets, power point presentations, songs and filmed presentations. There were some budding television presenters!

This afternoon, the children have shared their information with each other and all learnt new facts about a different area of the Egyptian topic. They all evaluated their own learning and considered whether they were successful, what they enjoyed, what was challenging and what would they change if they had the chance to do this type of activity again. 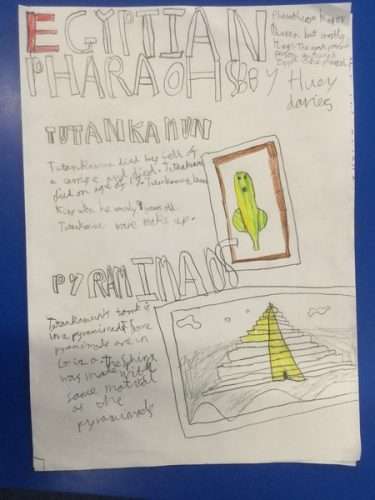 Bluebirds have started learning all about fractions and have been using equipment to calculate fractions of amounts. 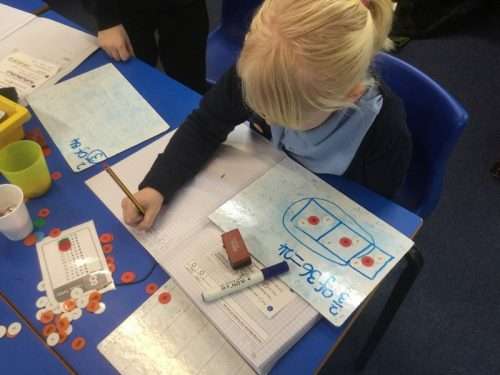 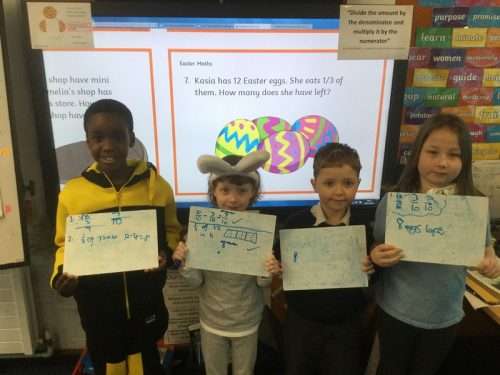 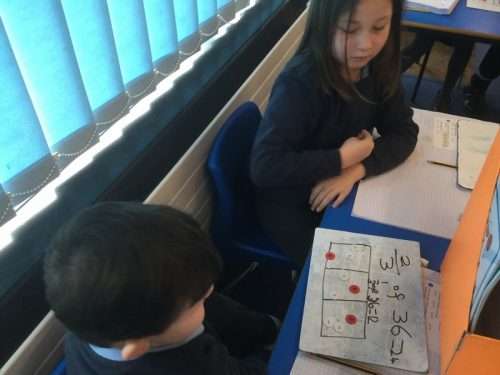 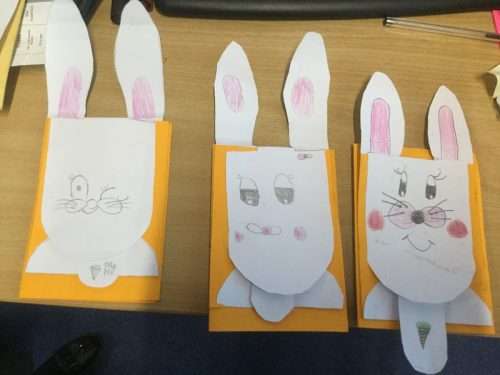 Bluebirds have created moving Easter cards this week. They had to consider the strength of the material and accurate cutting to create a moving card. The tongue of the rabbit is pulled to make the ears flap!

Kiall brought in a very precious photo album that belonged to his Great Grandad. The photos were taken in the 1940s during the war and included photos of the Pyramids, Sphinx and River Nile. There were also photos of newspapers from that time which linked well with our current writing in English.

Bluebirds loved looking at all the wonderful photos. Thank you for sharing them with us Kiall. 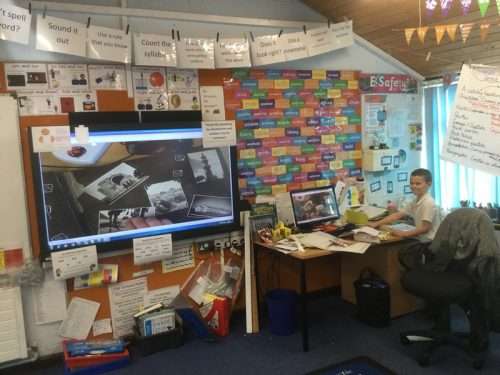 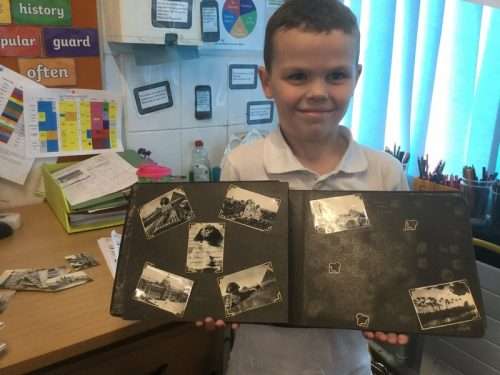 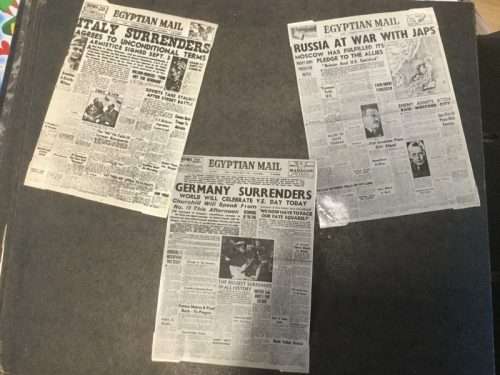 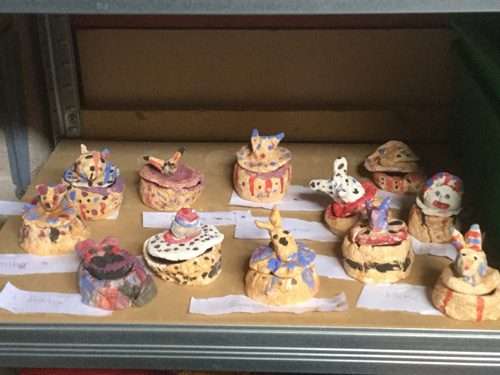 Bluebirds have been successful in creating their own canopic jars and papyrus paper which they decorated with hieroglyphics. Well done Year 3! 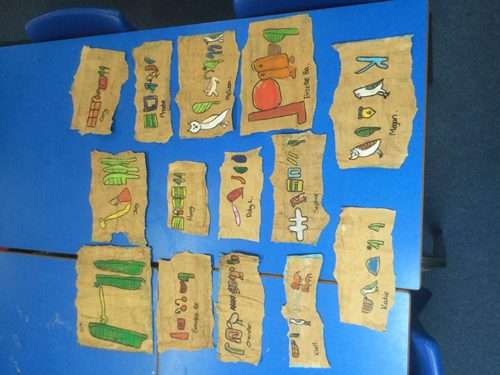 Today, Bluebirds heard the story of ‘The Last Supper’ from the Bible and considered what sort of a friend Judas was to Jesus. The children developed a bank of adjectives and phrases to describe Judas.

What sort of a friend was Judas?
Disloyal, two-faced, dishonest, mean, nasty, selfish, couldn’t be trusted, untruthful, bad, unhelpful. sneaky, sly and evil. Bluebirds decided they would not like him to be one of their friends.

What happened at The Last Supper?
Kezi – Jesus said to drink the wine, as it represented his blood.
Evie – Soldiers arrested Jesus in the garden of Gethsemane.
Pheobe – Jesus broke the bread and told his disciples it was his body so they could remember him.
Kennie – Jesus had twelve disciples.
Poppy – Jesus knew Judas was going to be nasty and betray him.

Today, Bluebirds learnt about Christians should own own up to their actions. They heard the story of Adam and Eve and how God gave them a chance to explain themselves to him after eating an apple they’d been told not to.

Bluebirds discovered that God is omniscient (all knowing). The children noticed this linked nicely to our current value word of honesty. If you have done something wrong you should own up. Keen eyed Bluebirds noticed the word “disobey” with the prefix we have been learning about (dis) meaning the not obeying God.

Why did Adam and Eve feel miserable and ashamed after eating the apple?
Sophie – I think they felt guilty and silly for trusting a stranger.

Why did God sadly at them when he asked why they were hiding?
Lexi – He knew what they had done already. 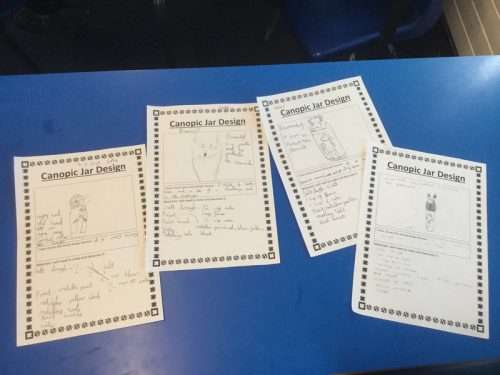 After planning their design, Bluebirds were busy creating Egyptian canopic jars this afternoon. They decided upon which tools were best to decorate the jars. Some children attempted hieroglyphics whilst others preferred to create an Egyptian style pattern. Once dried, we will be painting them in colours used during Egyptian times.

Harry – I liked making the head part best.
Poppy – I am pleased with how the mouth and ears look on my jar.
Evie – This was quite tricky. You have to persevere!
Brooke Be – I chose to make a dog lid because it’s my favourite animal.
Huey – We had to think about how to split our dough up to make the jar, lid and head.

In Circle time, Bluebirds discussed our value word of honesty. Mrs Parry invited the class to share their views and opinions together.

Why is honesty important?
Katerina – It’s important to be honest if you don’t understand your school work so the teacher knows to help you.
Chandler – If you lie no one will believe you.
Joey – If you aren’t honest you will be in trouble and told off.
Evie – If you don’t tell the truth people won’t know how you feel.
Kennie – It is wrong to lie.

Do you think people are honest enough?
Kezi- Most people are but when adults get into trouble they could end up in prison.
Sumaiya – It would be best if all people were always honest.
Amber – Not enough people are. It should be everyone!

Should we always be honest? Why – explain your reasons?
Melissa – Always be honest else no one will trust you.
Naly – If there were no liars it would be an even better school!
Brooke – You should else you could end up with a yellow card for lying.

What are some examples of dishonesty you really dislike?
Megan – I don’t like it when someone lies and then later tells the teacher the truth (a different story) because I don’t know who to believe.
Sophia – You lose trust in people.

What are some examples of honesty that you especially appreciate?
Sophie – I like to hear the truth and know people are consistently honest.
Lexi – You don’t get into trouble when you tell the truth.
Brooke – I like people who tell the truth.

Has someone ever been dishonest with you and how did it make you feel?
Pheobe – I feel sad because someone has lied to me. I feel let down.
Katie – Spreading rumours is upsetting as it is lying.
Harry – I feel angry if someone lies to me.
Cory – I feel cross because it is wrong.
Rubi – I am upset if I’m lied to. They shouldn’t do it.
Elliott – I am unhappy if someone lies to me. 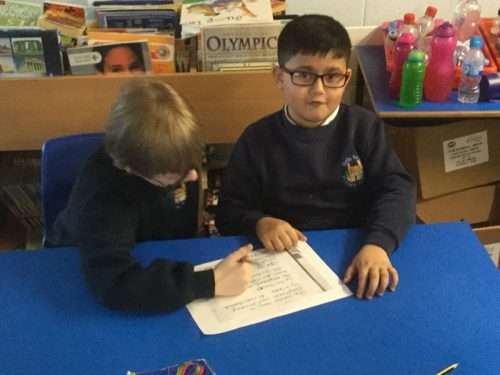 Today, Mrs Parry presented Bluebirds with part of a fable she had written. Unfortunately, the children noticed a lot of errors that needed correcting! They got to work straight wait and helped Mrs Parry to edit her work!

Afterwards, the class considered how her writing could be improved and inserted some fronted adverbials. Suddenly, they realised she had not included ANY conjunctions so helped her to extend some of her sentences. Mrs Parry said she hopes Bluebirds do such a thorough job editing their own fables now! 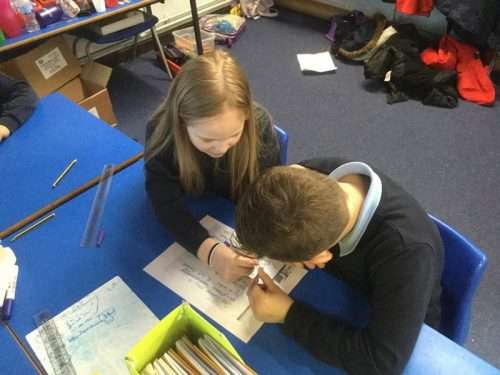 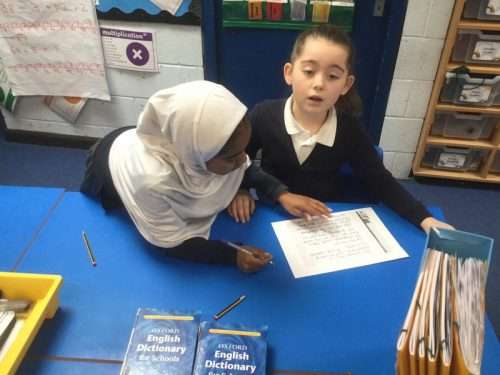