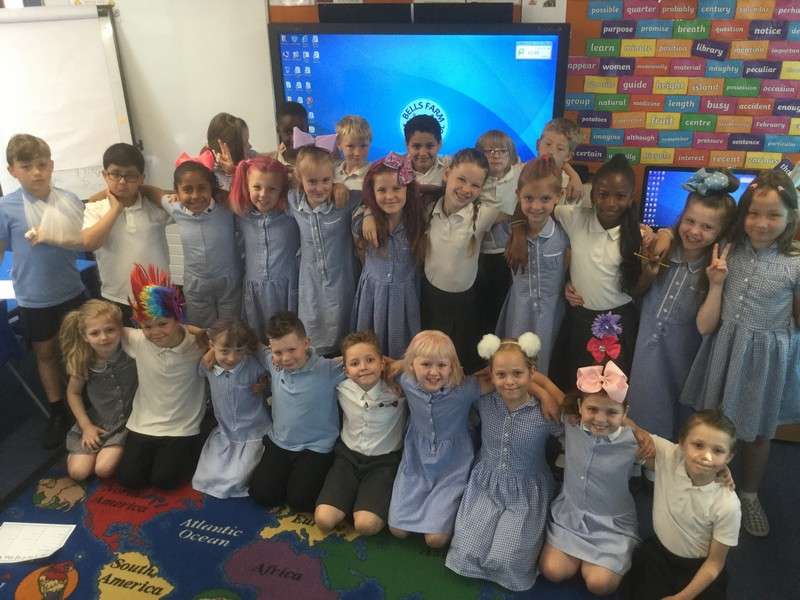 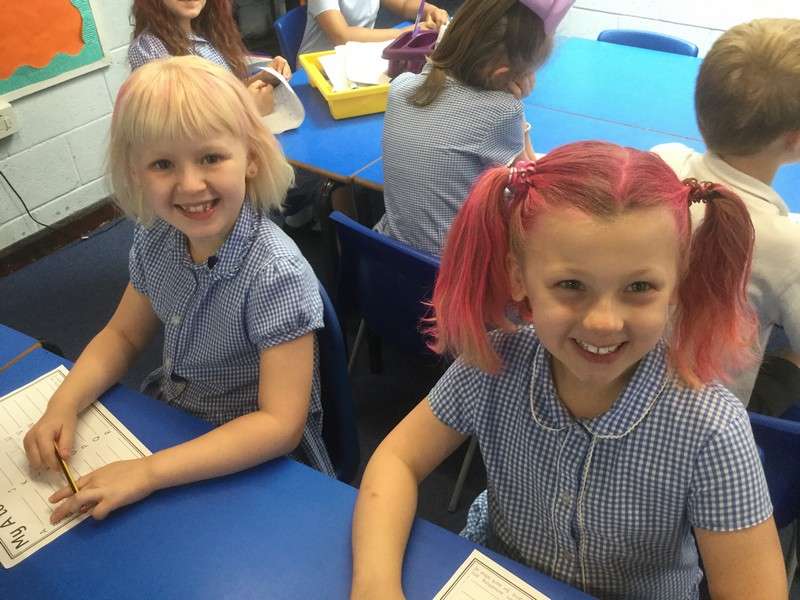 Bluebirds impressed one another with their outrageous and funky hairstyles for the last day of term. Good Luck in Year 3 to all our Bluebirds as they fly up to Year 4. You are a lovely group of children and we are really going to miss you – Best Wishes from Mrs Parry and Mrs Johnson. 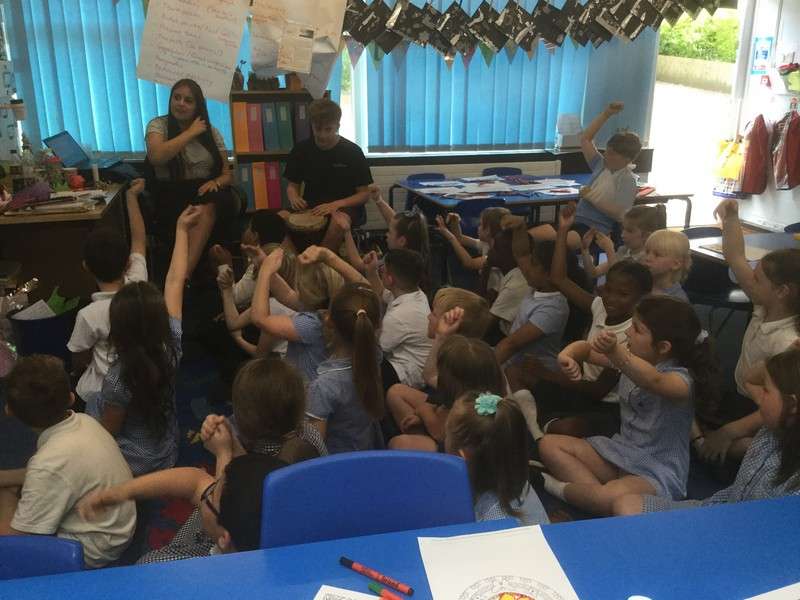 Today, Bluebirds enjoyed a music session with Beth and Will Parry (Mrs Parry’s musical children) in class. The class sang a variety of action songs and repeat/copy songs whilst Beth and Will provided some accompaniment with the maracas and drum!

Last of all, Bluebirds wanted to sing their favourite song of the year “This Is Me”.

This morning, PC Bennett visited Year 3 with his two police dogs, called H and Olaf. To begin with, he asked the children how they could identify whether someone was a police officer. Afterwards, he showed the class his bullet proof vest including equipment such as a walkie talkie, a torch, a baton and CS gas spray. Some children were lucky enough to try on police head gear!

PC Bennett explained how his dogs were specially trained and shared what the dogs are able to do to help him do his job. First of all, the children were introduced to Olaf, who is a two year old German Shepherd. Besides catching suspects, Olaf can help P.C. Bennett to find missing people. Olaf demonstrated finding some hidden items around the playground. Next, the children met H who is an eight year old Springer Spaniel. He was very excited and demonstrated sniffing out an empty container that once had a bullet inside. He also helps P.C. Bennett to catch people who have naughty drugs.

Finally, all the children got to sit inside the police car and were thrilled to hear the loud siren and see the blue lights flashing across the playground! The children really enjoyed meeting PC Bennett and promised to wave at him if they see him out and about around the local area. 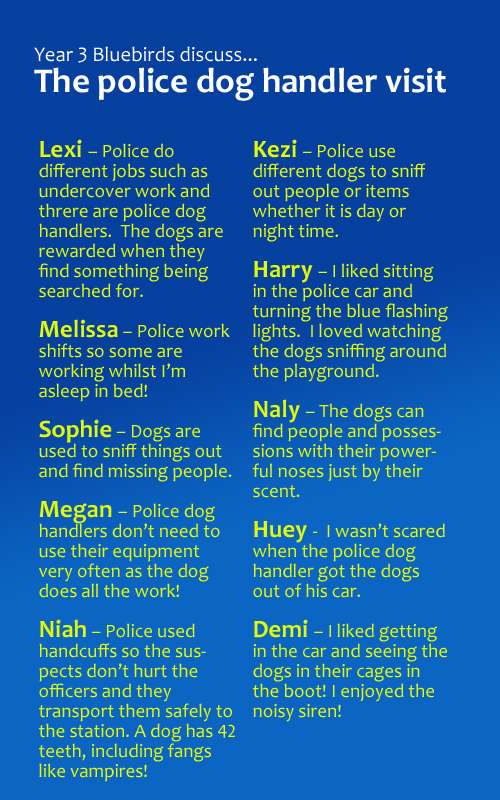 Today, Bluebirds discussed how a chemical change occurs (either by giving off heat, colour or a smell and changing shape or size. The children experienced a chemical change when they conducted an experiment. They filled a plate with full fat milk and added drops of food colouring. Next they placed a cocktail stick, dipped in detergent, vertically into the mixture.

What happened?
Evie – It looks like it’s changing back to just milk.
Brooke Ba – it’s like the milk and colours doesn’t like the washing up liquid and is moving away from it.
Harry – One liquid is stronger than the other.
Poppy – it’s because they a different liquids.
Amber – The detergent thinks the colours are dirt and is separating them.

Why did this happen? 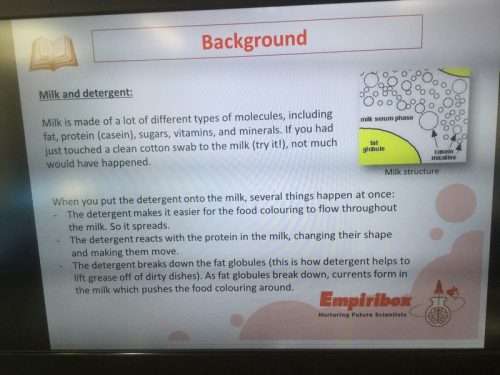 The children loved the “magic milk” experiment. Here are some photos of them conducting the experiment:

Well done to Sophia for receiving a purple and white belt for her kata performance. She also received a certificate. Sophia performed in front of her sensei (teacher) and other people. 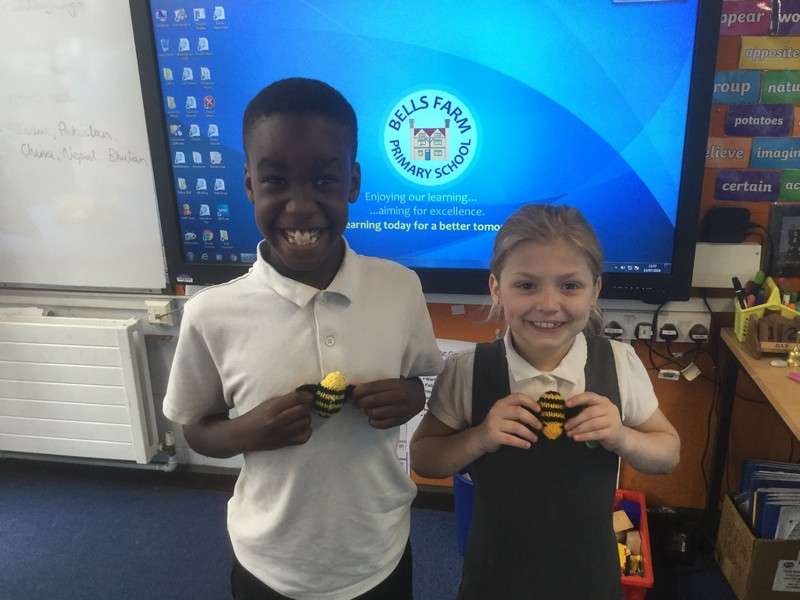 This morning, our class finalists (Megan, Kezi, Evie, Harry, Phoebe, Kennie, Elliott, Yusif and Demi), took part in their first Bells Farm Spelling Bee competition in the school hall. They were very brave as this was in front of the rest of the school, speaking into a microphone!

A huge congratulations to Demi and Kezi who were the winners in their category of spelling words. Their fellow classmates were very supportive and proud of them. Congratulations! 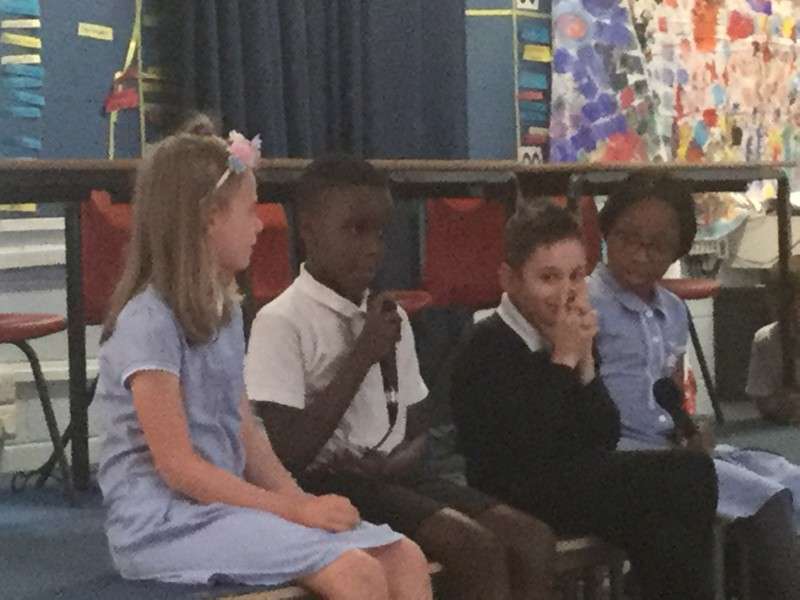 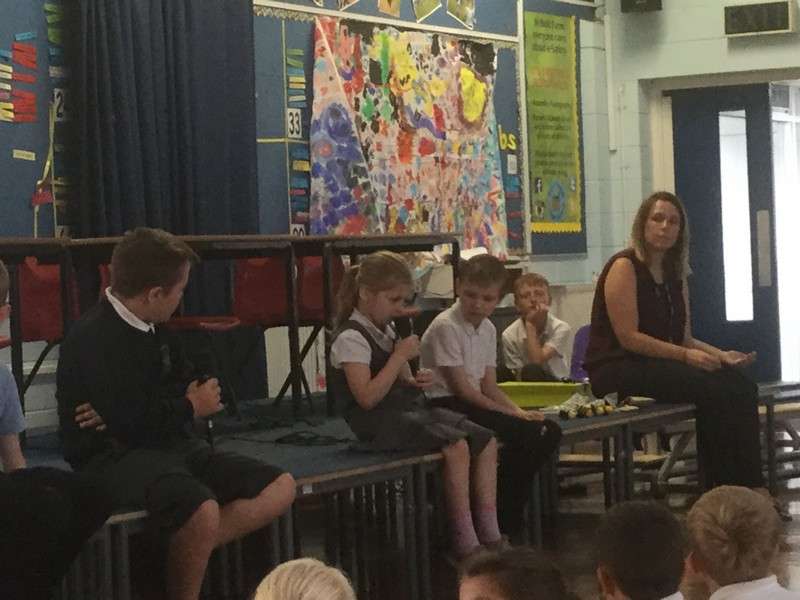 Year 3 have been busy working through their final Maths topics over the last week or so.

The children spotted right angles around the room, realising they were everywhere! They learnt about Obtuse and Acute angles and identified where they were in 2D shapes. The class identified parallel and perpendicular lines around our room. Today, children have been choosing a shape and describing the properties to a friend, to see if they can guess the shape, hidden in their hand! 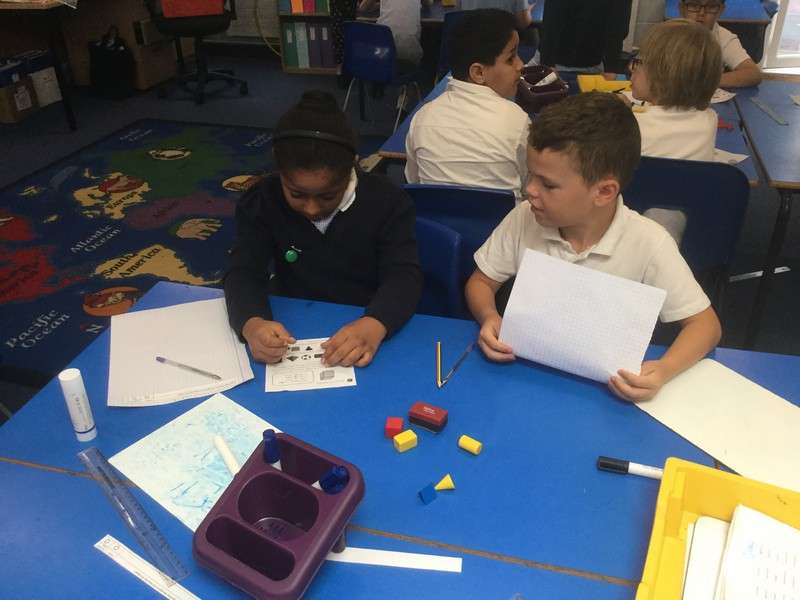 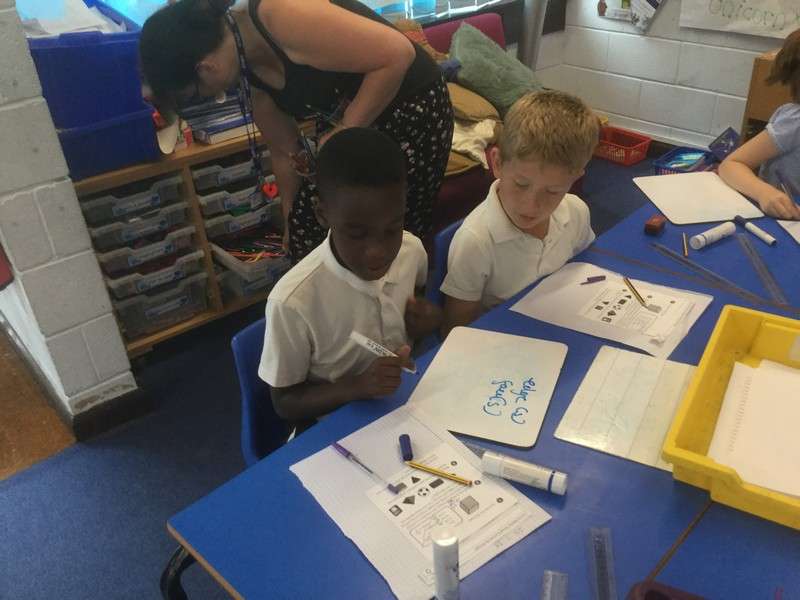 Since reading a wishing tale in English, the class have been busy creating a collage of a scene from The Tin Forest story. They all look fantastic! 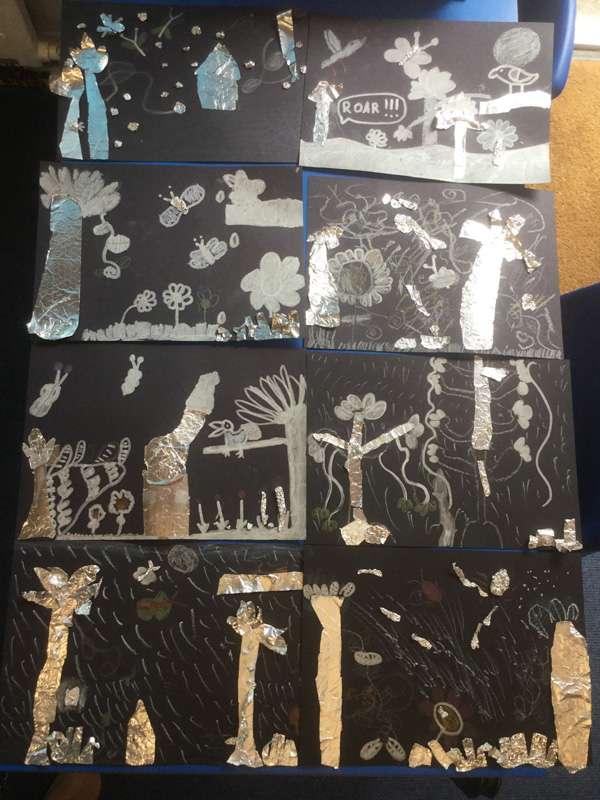 Well done to Sophie who has been working on two different projects on Scratch at home. Sophie has further developed her understanding of Scratch and the different areas of coding within the program.

Mr Baddhan is delighted at Sophie’s desire and perseverance to complete these two programs.

Let us know what you think of them by leaving a comment below.