Bluebirds have been busy planning and designing their pencil cases. They have decided to use Velcro to fasten the case but will be sewing a button on as part of the decoration. There are some beautiful designs! 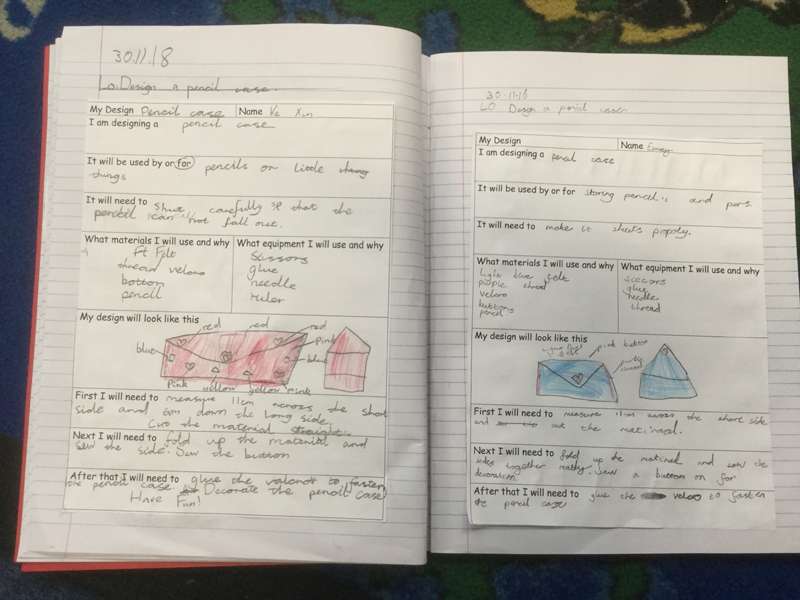 Bluebirds have been applying their multiplication and division knowledge to solve word problems. 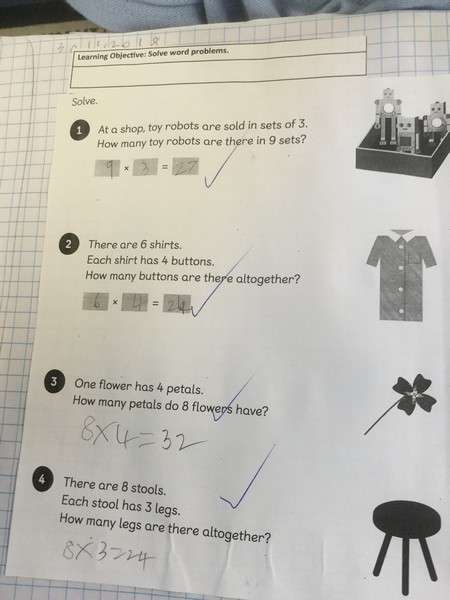 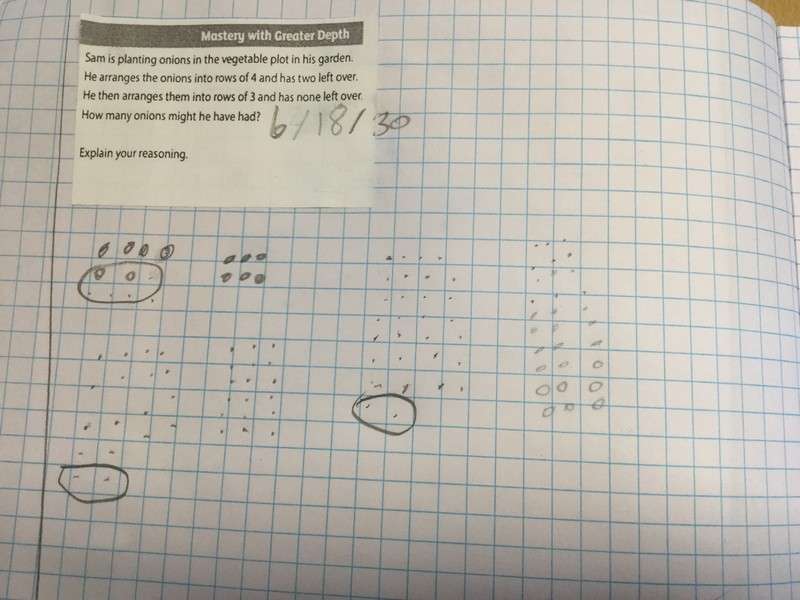 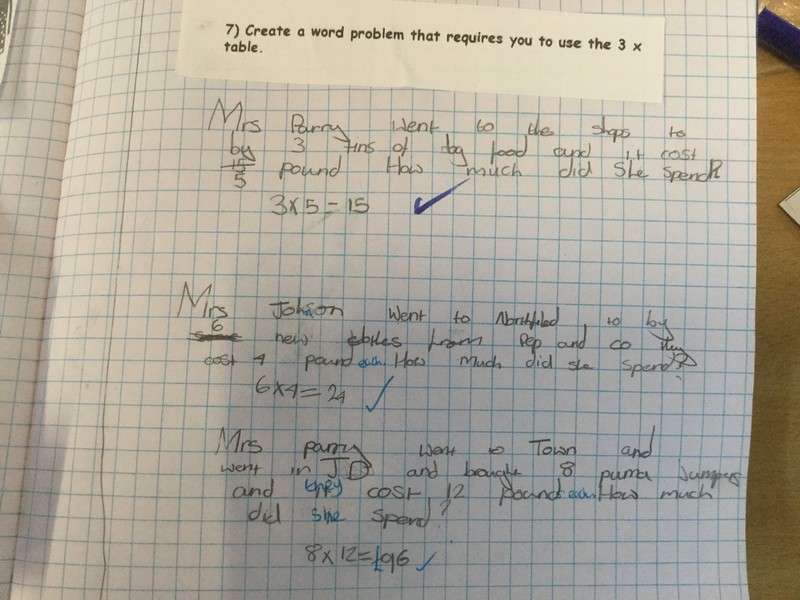 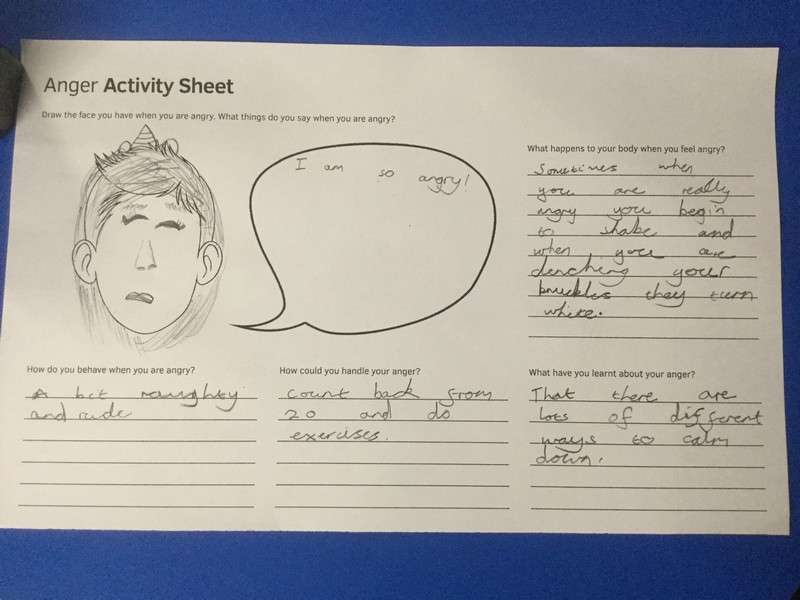 In PSHE, we talked about what makes people angry. Examples included, lying, stealing, unfairness, and irritating northern and sisters! We talked about strategies to use to help us deal with anger. 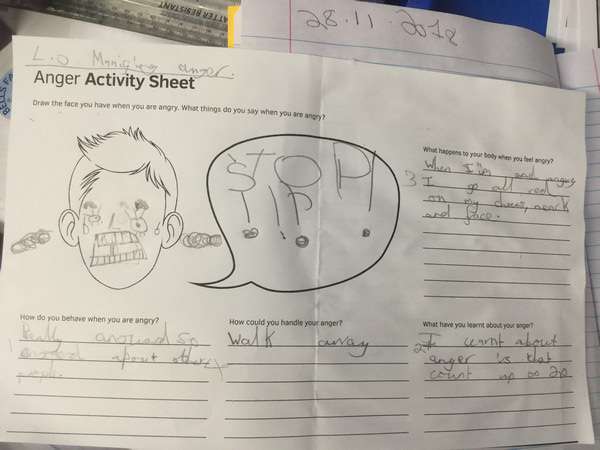 Today, Bluebirds heard the story of the creation of the prophet of Adam and learnt that Muslims believe human ancestry goes back to Adam. We discussed how people have changed since that time due to climate, language, culture, food etc).

We discussed how we have similarities and differences and sat with a partner to compare these areas. 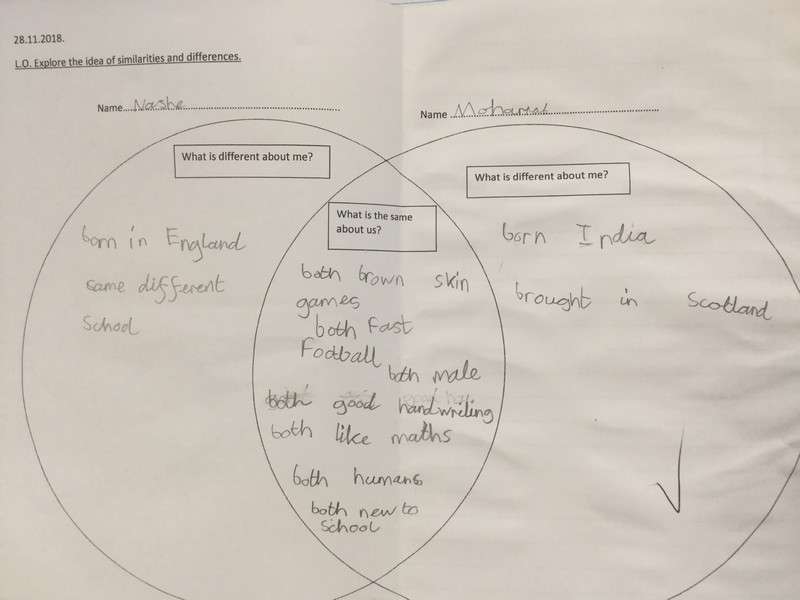 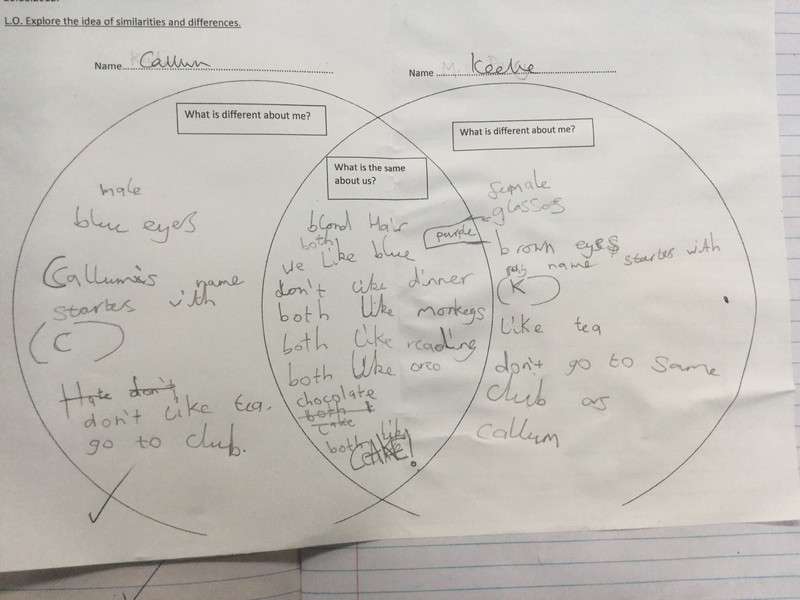 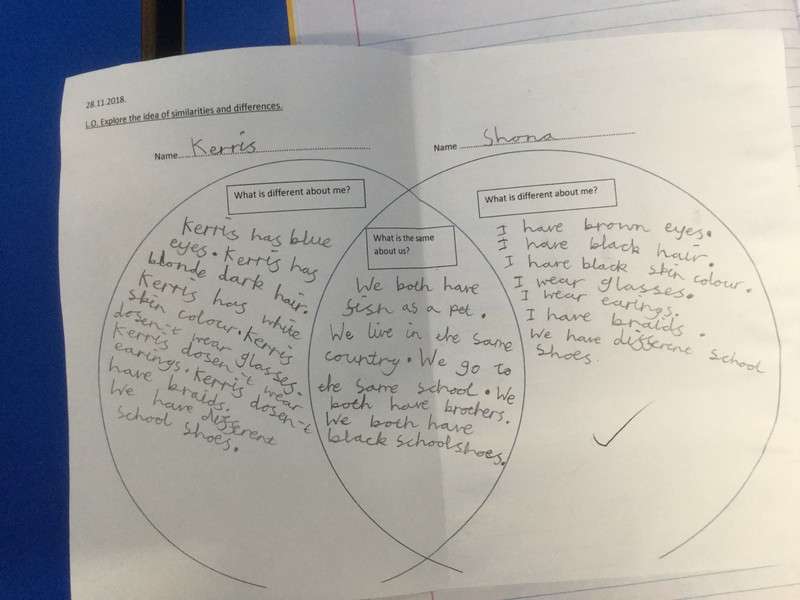 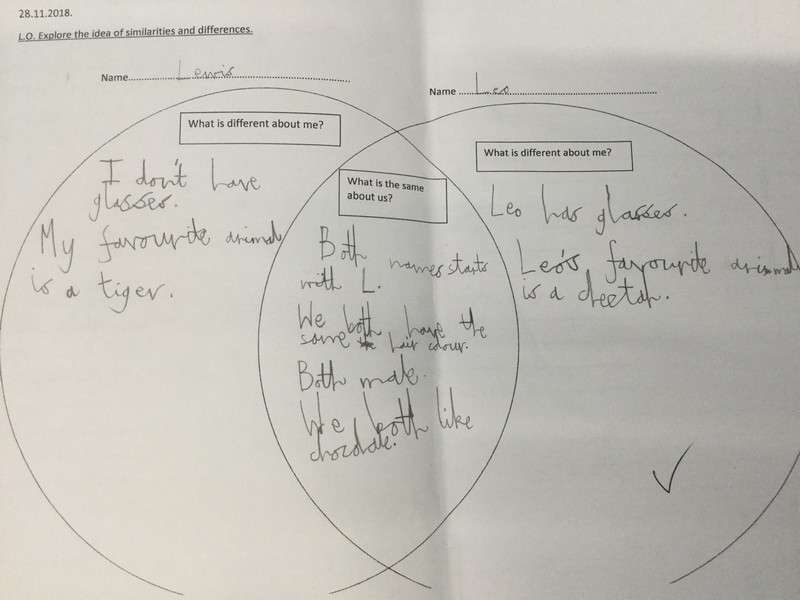 On Friday, whilst discussing Autumn and the leaves changing colour, Mrs Parry demonstrated how to perform chromatography to separate the colours found in leaves. Afterwards, she asked Bluebirds to be both detectives and scientists to help establish which staff member’s pen had written a note left in the staffroom, admitting they had taken the last doughnut! There were three possible suspects! The children conducted the experiment below: 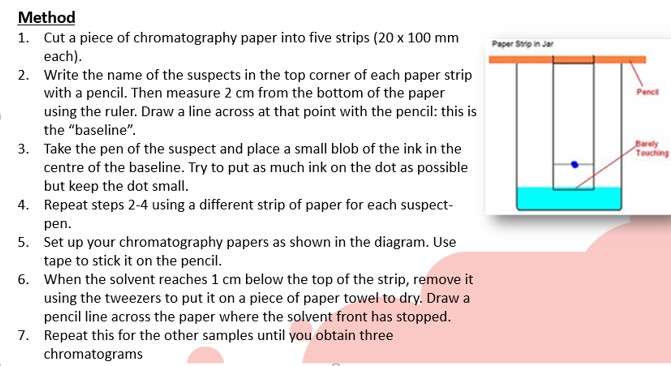 The children had pens belonging to Mrs Butterworth, Miss McClelland and Mr Johnston. They had to match their ink to the one that had written the apology note to identify who had taken the cake.
Mr Johnston was found to be guilty…..the mystery was solved! Well done Bluebirds!

The children found out that Ink is not made of just one pigment (colouring stuff). To make one colour, you need several pigments and different pen brands use different mixtures of pigments. Some pigments are better at dissolving in the solvent than others. This means that when the solvent travels up the paper strip, some pigments will “follow” it to the top while others will lag behind. This way you can separate the different pigments (solutes) inside the ink.

Bluebirds recapped their knowledge of the “a” sound using ai, ay, a-e or ea spelling. They completed an activity thinking of any words with the “a” sound using the spelling or either ei, eye or eigh. The results were fantastic! Here is the list so far – a great class effort! Lewis gave us the word “sensei” which is the name for a martial arts teacher. Some children remembered their Year 3 word list with reign. Nathan use the working wall and ground weight and height. Well done Bluebirds! 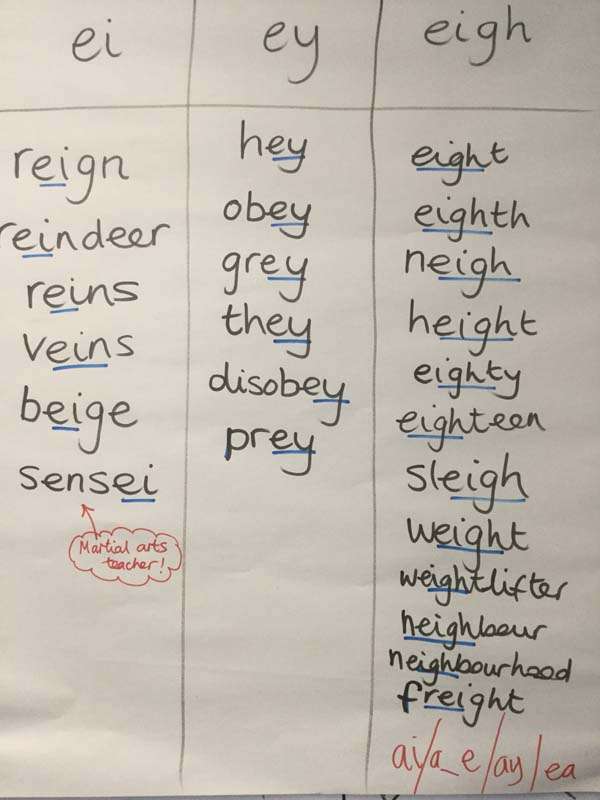 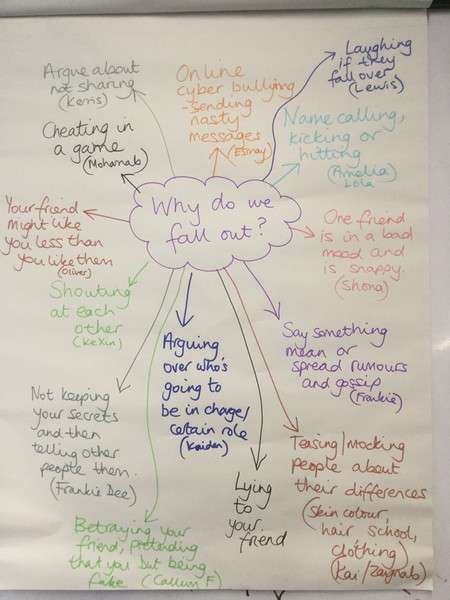 Bluebirds thought about the reasons people fall out and break friends. They talked about who can help in school and what systems we have in place. The children knew they could go to any trusted adult or the peer mediators and that we use Peacemakers.

Mrs Parry reminded the children about the “needs” cards they can use to help them think about what they need after a fall out (e.g. empathy, time, space, respect). The children got into small groups and took it in turns to become the teacher with a set of peacemaker questions to use, just like the grown ups use in school! There was some great role play!

The crocodile has now fully emerged from its shell and has settled into his tank! We think he is fully grown now so will be removing him to see what happens as he dries out! 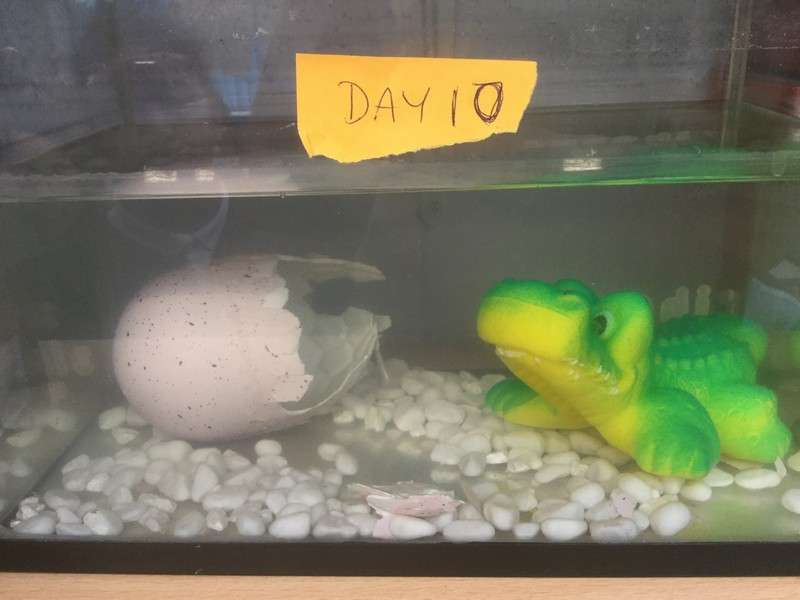 Bluebirds have been using their inference skills this week to look for clues in their English text, to establish the thoughts and feelings of characters by their actions. They also found words and phrases used for effect and to create fear in the take, ready for when they write their own tales of fear. The children practised their inference skills using pictures too. Here are some examples. Do you agree with their opinions? 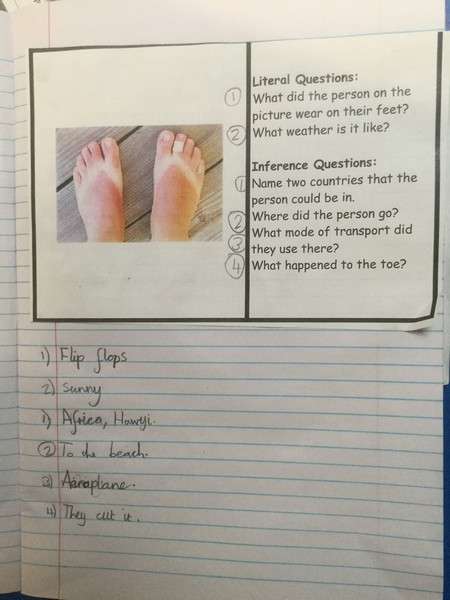 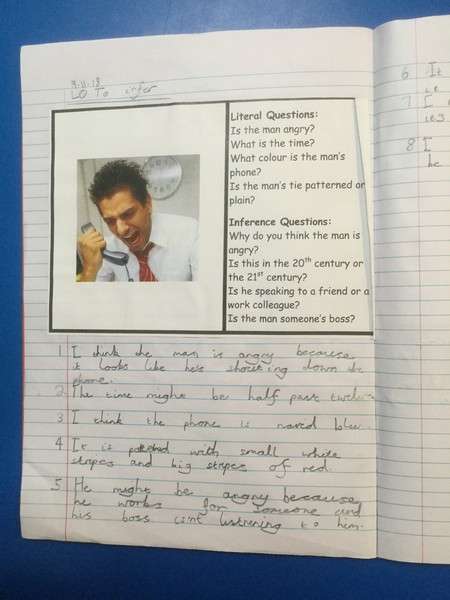 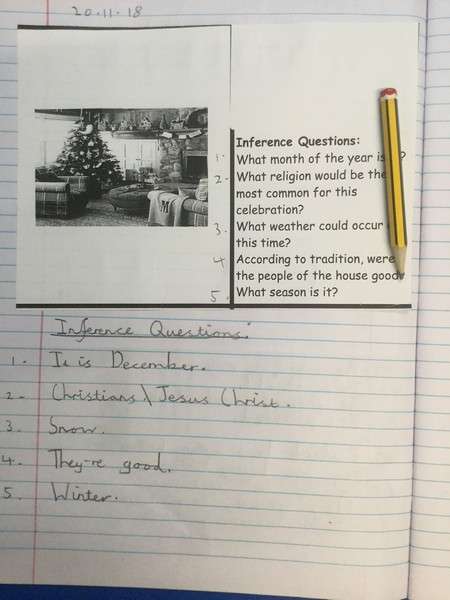 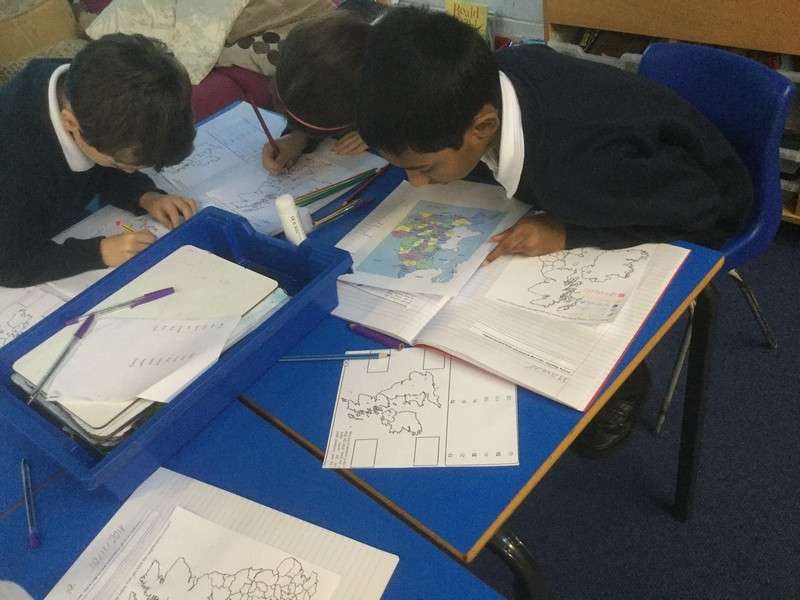 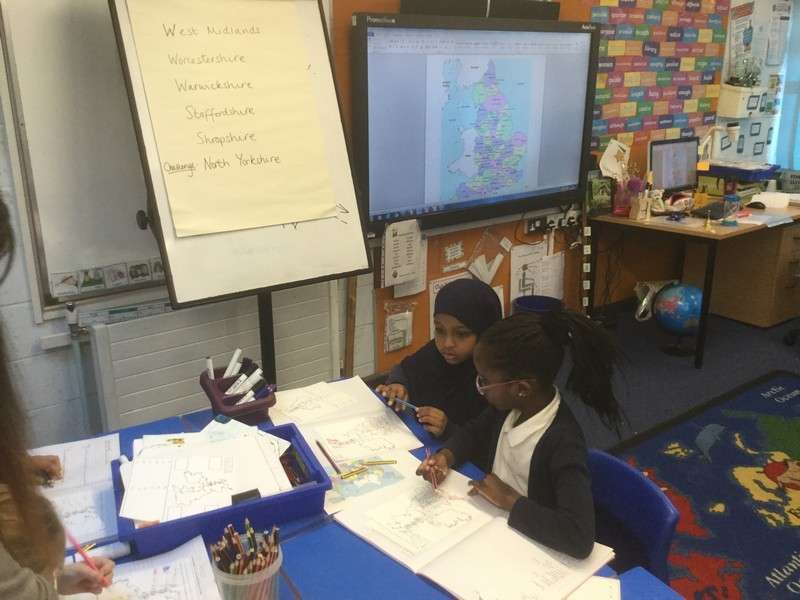 Bluebirds found out what a county was today and then used a UK map to find some counties, making a key for each one. They learned that a county is the top level of local government who controls the local area and services within it, such as education, transport, policing, fire safety, social care, libraries and waste management. We also found the UK on our globe and found out which countries make up the United Kingdom and their respective capital cities.

Taya – The capital of England is London. I’ve been to Cardiff before.
Moharnab – I’ve visited Edinburgh and the castle when I lived in Scotland.
Nyeema – Birmingham is in the West Midlands