This morning, the Bluebirds in year 3 were planning to write a list poem using noun phrases in English.

We had an image of the crocodile, Krindlekrax from our class reader ‘Krindlekrax’ and labelled nouns around him. 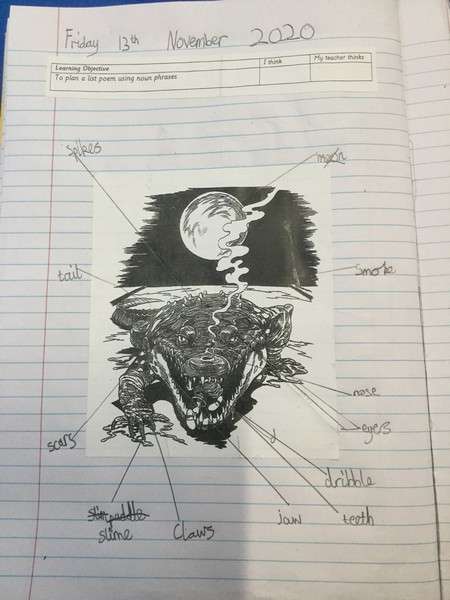 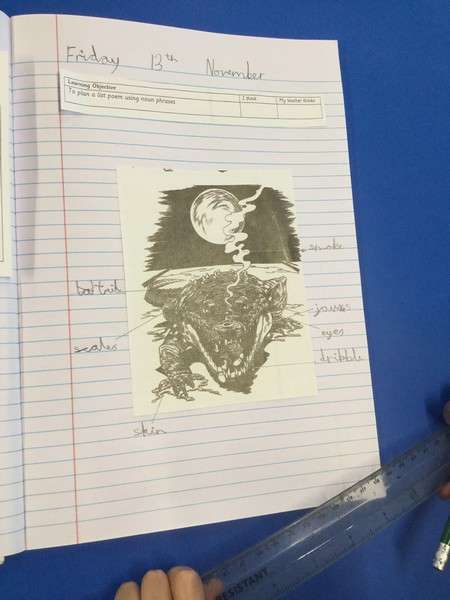 Using the nouns that we labelled on the picture, we added an adjective to turn them into noun phrases. 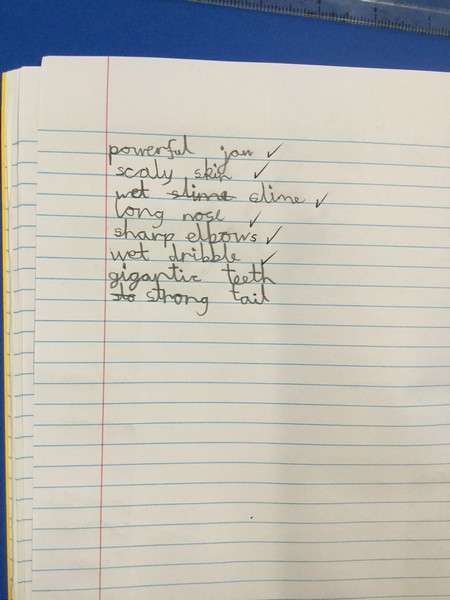 We then turned those noun phrases into sentences that we could use in a poem. 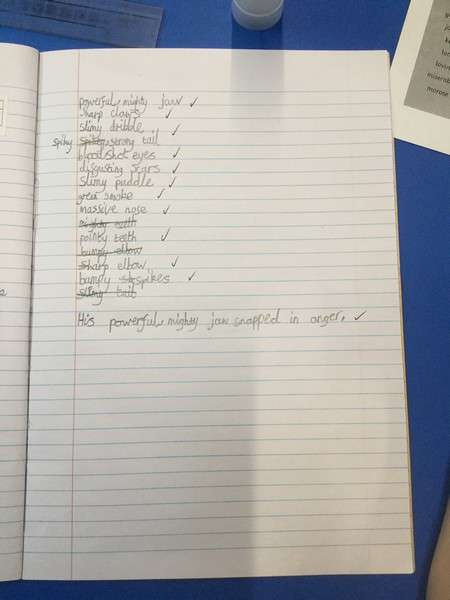 This morning in English, the Bluebirds were reading poems and finding noun phrases in the poems.

First, we played reading ping-pong and each took it in turns to read a line in the poem with our partner. 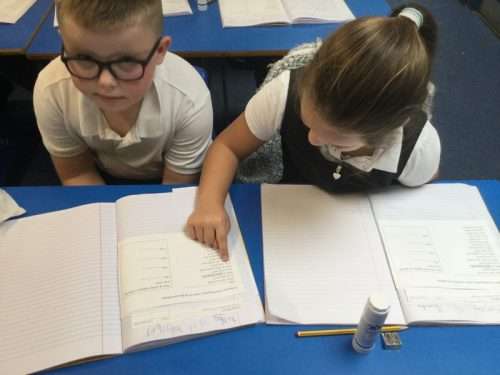 We thought of a name for the poem and highlighted the noun phrases. When we had finished we thought of alternative adjectives for the nouns included in the poem, we shared our ideas with the class. 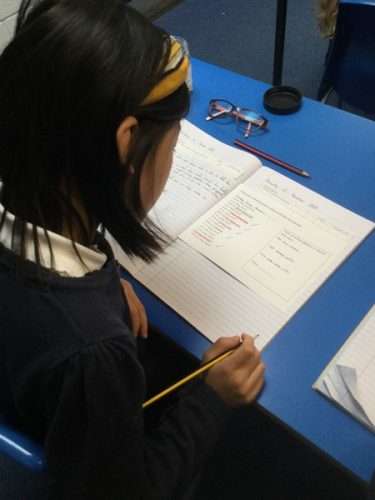 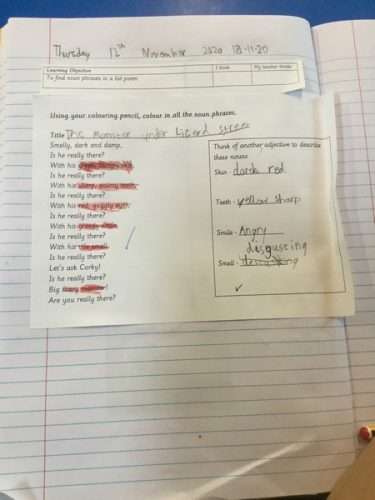 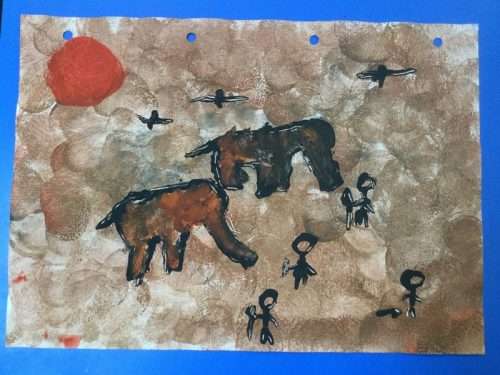 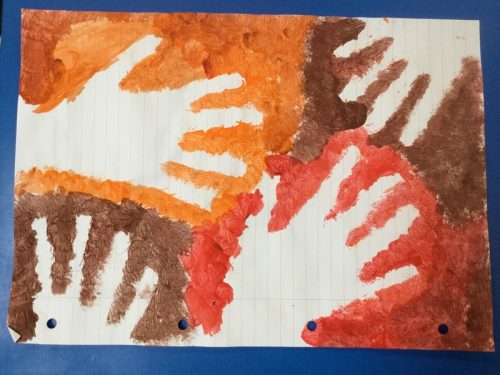 Last week the Bluebirds were learning at home, Mrs Moore was so pleased with the work that was given in on Monday and the effort everyone put into their work. Many gold and silver cards were given out to the children who did some excellent work.

One of the home learning tasks was to draw or paint a picture that resembled a cave painting. Daisy C gave in her paintings on Monday and it was clear how hard she had worked on them. Mrs Moore was extremely impressed and Daisy’s paintings will be displayed on our Stone Age display!

This morning in year 3, the Bluebirds were putting their noun phrases from yesterday’s English lesson into sentences.

The aim of the sentence was to tell the reader more about the noun and to add more description. Before break, we wrote sentences together on the white board. 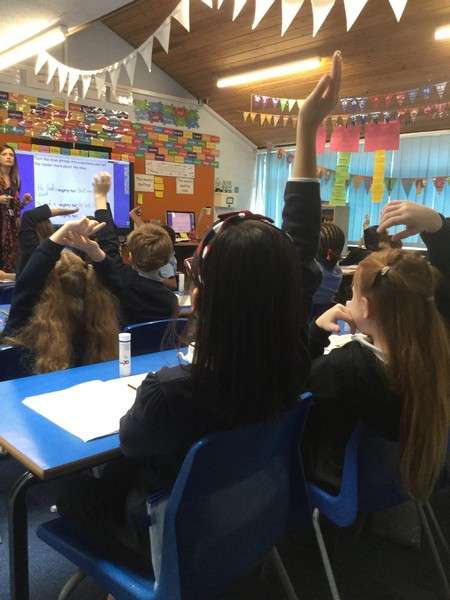 We wrote three sentences in our books, using noun phrases from yesterday’s lesson and ensuring we had capital letters and full stops. 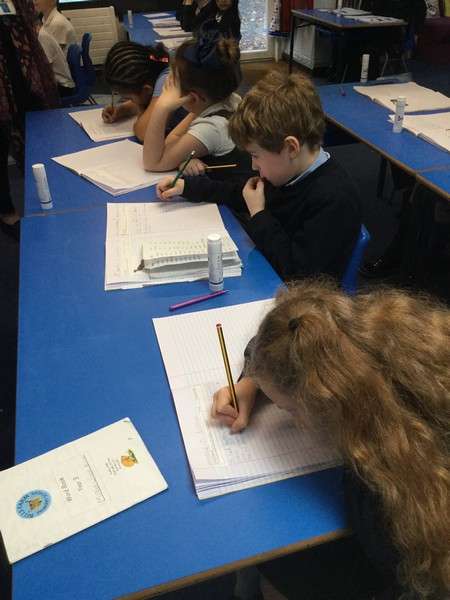 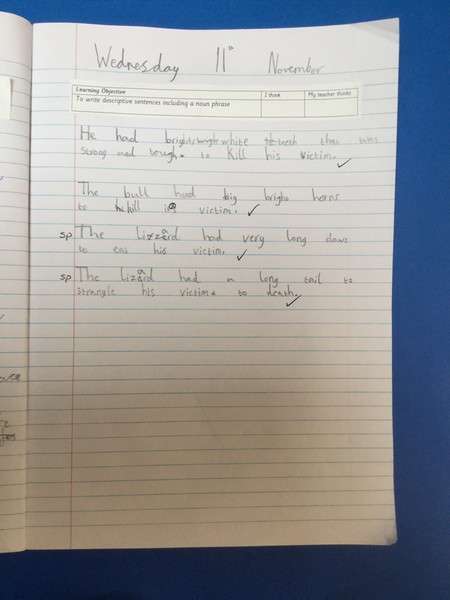 This morning in English, the Bluebirds in year 3 were using appropriate adjectives to describe an animal.

First, we described a crocodile together on the board. We put an adjective together with a noun to make a noun phrase. 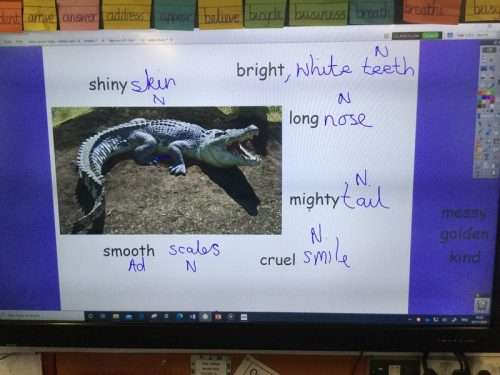 Then, in our books we did the same for an image of a lizard and we could choose our second animal. 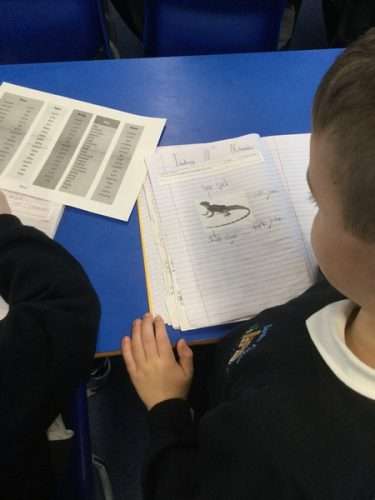 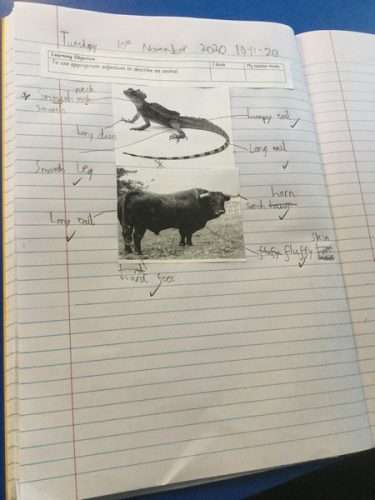 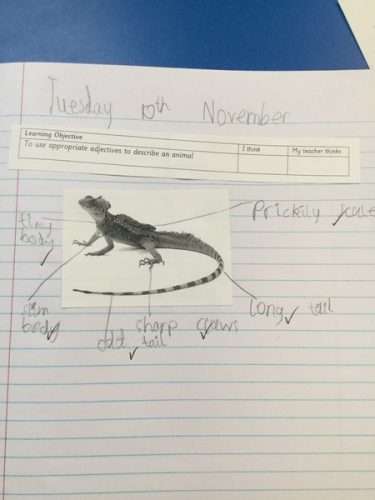 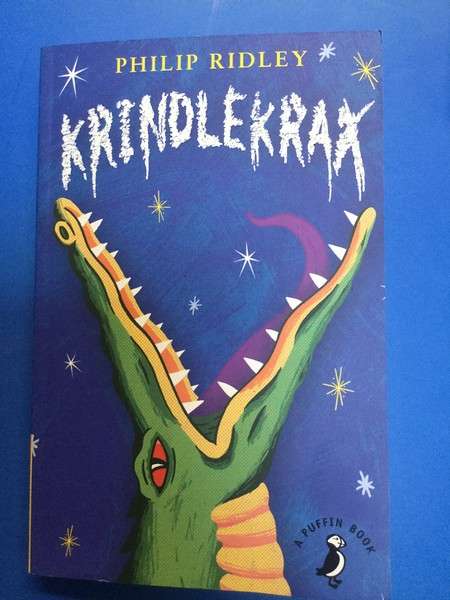 We have had a fantastic morning and a great start to the new half term.

In English this morning, we started our new class reader, Krindlekrax. Everyone was given a copy of the first two chapters in their home learning pack. We read the fist two chapters together this morning and focused on who and where questions. A who question will be answered with a person or living thing. A where question will be answered with a place. 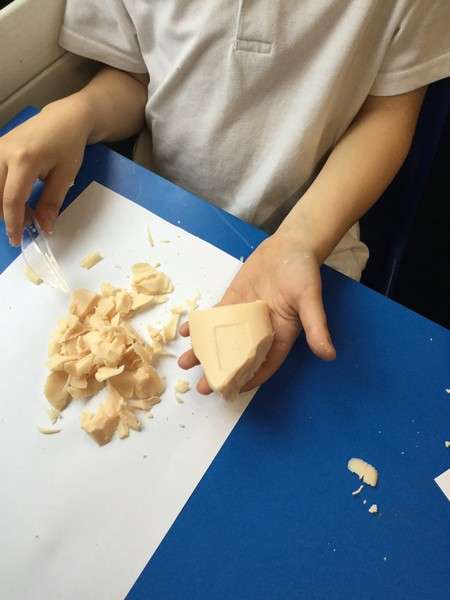 This afternoon during topic, the Bluebirds had a go at Stone Age flint knapping with bars of soap and plastic knives.

First, we looked at flint spear heads that Stone Age people used as weapons. We then each had a bar of soap and a plastic knife and shaved the egdes of the bar into the shape of a spear head. 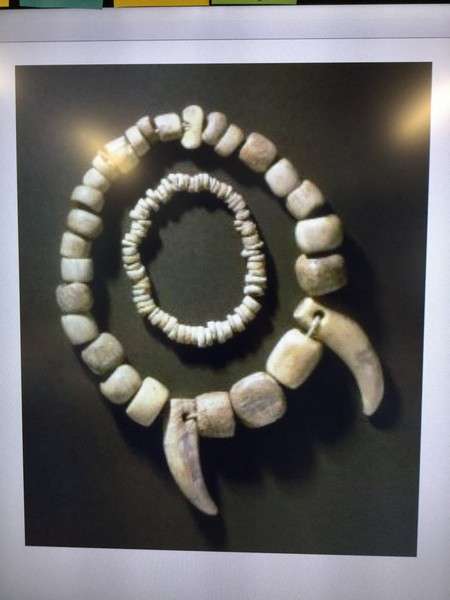 This afternoon in Topic, Bluebirds were having a Stone Age experience! We made Stone Age style jewellery out of salt dough.

First, we looked at images of Stone Age jewellery on the interactive white board.

Then Mrs Moore showed us how to roll and manipulate the salt dough into bead and tooth shapes. We use a plastic needle to make the hole so we could thread them into a necklace. We will leave leave our beads over night to dry out and then thread them tomorrow!

This morning in English, Year 3 started writing their non-chronological report about the Stone Age.

We discussed ideas for a title for the report and possible subheadings for each paragraph as a group. We could use one from the board or choose our own. 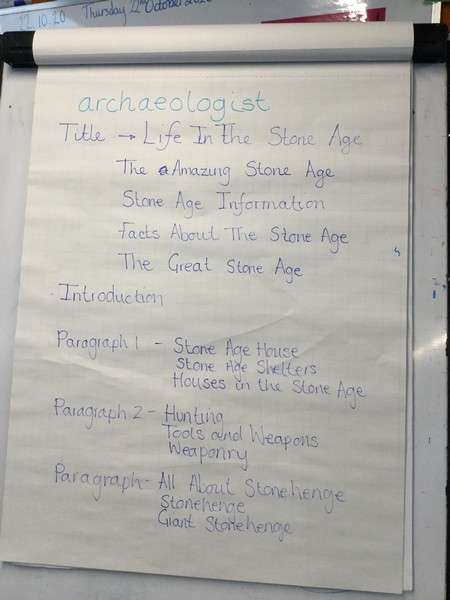 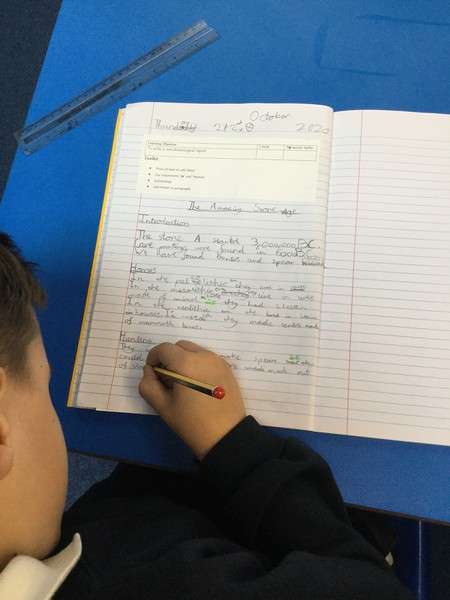 Used the plans we wrote yesterday and put our notes into full sentences and paragraphs. We used noun phrases to add more detail, and the conjunctions so and because.

This morning in English, the Bluebirds in Year 3 were using the research they completed in their topic lesson to start planning a non-chronological report about the Stone Age.

We had our Topic books so we could read our research and wrote our plan in bullet points. We will put our bullet points into full sentences when we write our report tomorrow. 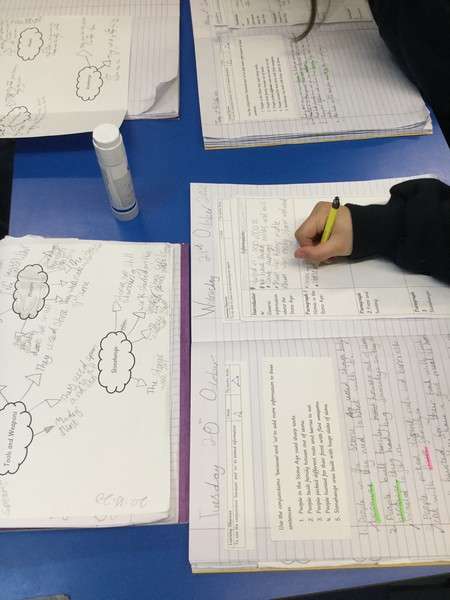 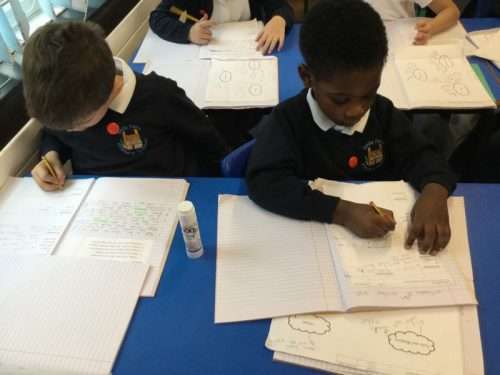 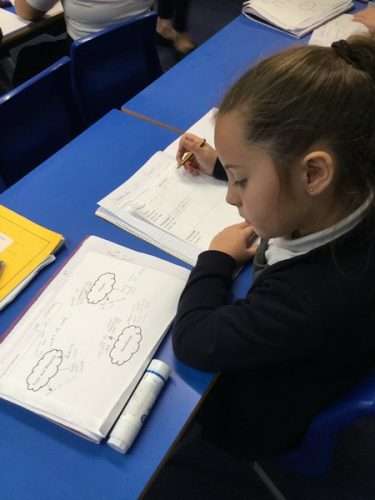